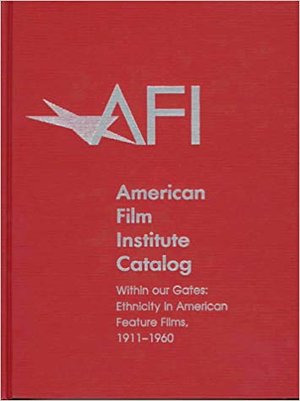 The 1911-1960: American Film Institute Catalog of Motion Pictures Produced in the United States Within Our Gates: Ethnicity in American Feature Films

The American Film Institute Catalog has won great praise for its comprehensiveness, reliability, and utility. These volumes are an essential purchase for every library, and individual researchers will also find them indispensable.

The newest AFI Catalog volume contains over 2500 feature-length films with an emphasis on racial and national ethnic experience in the United States. Included are films from the 1940s and 1950s such as Giant, The Defiant Ones, Gentleman's Agreement, Bright Victory, and Broken Arrow. In addition to traditional "Hollywood" films, independent productions by African-American filmmakers and various ethnic and religious organizations are also given extensive treatments.

This is the first of the AFI Catalog series to include films from more than one decade. Along with the film entries are several indexes, including personal names, ethnic group, subjects, and genre. As with other AFI Catalog volumes, full production credits, cast, plot summaries, notes, subject headings, song titles, and bibliographic citations are provided.

"[These volumes] are endlessly absorbing as an excursion into cultural history and national memory."—Arthur Schlesinger, Jr.