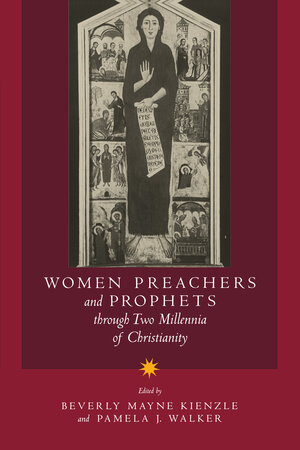 Women Preachers and Prophets through Two Millennia of Christianity

For nearly two millennia, despite repeated prohibitions, Christian women have preached. Some have preached in official settings; others have found alternative routes for expression. Prophecy, teaching, writing, and song have all filled a broad definition of preaching. This anthology, with essays by an international group of scholars from several disciplines, investigates the diverse voices of Christian women who claimed the authority to preach and prophesy. The contributors examine the centuries of arguments, grounded in Pauline injunctions, against women's public speech and the different ways women from the early years of the church through the twentieth century have nonetheless exercised religious leadership in their communities. Some of them based their authority solely on divine inspiration; others were authorized by independent-minded communities; a few were even recognized by the church hierarchy. With its lively accounts of women preachers and prophets in the Christian tradition, this exceptionally well-documented collection will interest scholars and general readers alike.

Beverly Mayne Kienzle is Professor of the Practice in Latin and Romance Languages at Harvard Divinity School, and Pamela J. Walker is Assistant Professor of History at Carleton University.

"This book presents dramatic, convincing evidence that the tradition of women's preaching extends back to the beginnings of Christianity. . . . It will be an inspiration to all who suffer from the legacy of constraints on female speech."—Carole Slade, author of St. Teresa of Avila

"The essays are individually inspiring and collectively interdisciplinary. . . . A powerful contribution to the history of preaching and public discourse."—Elisabeth Schüssler Fiorenza, author of Jesus: Miriam's Child, Sophia's Prophet

PART TWO: THE MIDDLE AGES
4. The Prostitute-Preacher: Patterns of Polemic against Medieval
Waldensian Women Preachers
Beverly Mayne Kienzk
5. The Voice of the Good Women: An Essay on the Pastoral and
Sacerdotal Role of Women in the Cathar Church
Anne Brenon
6. The Right of Women to Give Religious Instruction in the Thirteenth Century
Nicole Beriou
7. Prophecy and Song: Teaching and Preaching by Medieval Women
Carolyn Muessig
8. Proclaiming Sanctity through Proscribed Acts: The Case of Rose of Viterbo
Darwen Pryds
g. Women's Sermons at the End of the Middle Ages: Texts from the Blessed and
Images of the Saints
Roberto Rusconi