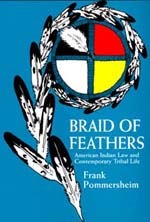 In this ambitious and moving book, Frank Pommersheim, who lived and worked on the Rosebud Sioux Indian Reservation for ten years, challenges the dominant legal history of American Indians and their tribes—a history that concedes far too much power to the laws and courts of the "conqueror." Writing from the perspective of the reservation and contemporary Indian life, Pommersheim makes an urgent call for the advancement of tribal sovereignty and of tribal court systems that are based on Indian culture and values.

Taking as its starting point the cultural, spiritual, and physical nature of the reservation, Braid of Feathers goes on to trace the development of Indian law from the 1770s to the present. Pommersheim considers the meaning of justice from the indigenous point of view. He offers a trenchant analysis of the tribal courts, stressing the importance of language, narrative, and story. He concludes by offering a "geography of hope,"one that lies in the West, where Native Americans control a significant amount of natural resources, and where a new ethic of development and preservation is emerging within the dominant society. Pommersheim challenges both Indians and non-Indians to forge an alliance at the local level based on respect and reciprocity—to create solidarity, not undo difference.

"Pommersheim's book captures the unique evolution of tribal court jurisprudence and the continuing challenge facing tribal courts to meet the demands of the communities they serve. . . . A must read."—Senator Ben Nighthorse Campbell, Colorado

"Braid of Feathers bursts with insights and rich evocations of the contemporary rebirth of American Indian cultures and practices. Written from the inside of tribal worlds, this book simultaneously affords a powerful vision of American pluralism. Useful analysis of timely topics, such as economic development initiatives using gambling enterprises, undergirds this important contribution to American Indian law and American studies."—Martha L. Minow, Professor, Harvard Law School

"A fresh approach by a thoroughly practical and experienced attorney/professor who understands the complexity of law as it is applied to living societies. Pommersheim deals easily with complex theories and doctrines because he has the good common sense to know that law must be worked out in Indian communities to promote a sense of order and, if possible, a modicum of justice. This volume will stimulate readers to move beyond abstractions and seek realistic solutions to perennial problems."—Vine Deloria, Jr., University of Colorado at Boulder

1. The Reservation as Place
2. The Colonized Context: Federal Indian Law
and Tribal Aspiration

3. The Crucible of Sovereignty: Tribal Courts,
Legitimacy, and the Jurisdictional Backdrop
4. Liberation, Dreams, and Hard Work: A View
of Tribal Court Jurisprudence

PART 3. ISSUES IN THE WESTERN LANDSCAPE:
A REGIONAL PERSPECTIVE

5. Tribal-State Relations: Hope for the Future?
6. Economic Development in Indian Country
Conclusion: A Geography of Hope