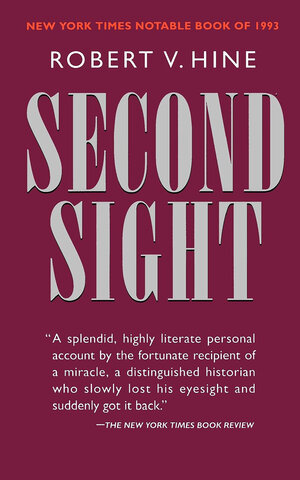 He knew he was going blind. Yet he finished graduate school, became a history professor, and wrote books about the American West. Then, nearly fifty, Robert Hine lost his vision completely. Fifteen years later, a risky eye operation restored partial vision, returning Hine to the world of the sighted. "The trauma seemed instructive enough" for him to begin a journal.

That journal is the heart of Second Sight, a sensitively written account of Hine's journey into darkness and out again. The first parts are told simply, with little anguish. The emotion comes when sight returns; like a child he discovers the world anew—the intensity of colors, the sadness of faces grown older, the renewed excitement of sex and the body.

With the understanding and insights that come from living on both sides of the divide, Hine ponders the meaning of blindness. His search is enriched by a discourse with other blind writers, humorist James Thurber, novelist Eleanor Clark, poet Jorge Luis Borges, among others. With them he shares thoughts on the acceptance and advantages of blindness, resentment of the blind, the reluctance with sex, and the psychological depression that often follows the recovery of sight.

Hine's blindness was the altered state in which to learn and live, and his deliverance from blindness the spur to seek and share its lessons. What he found makes a moving story that embraces all of us—those who can see and those who cannot.

Robert V. Hine (1921-2015) was Professor Emeritus of History and a founding member of the University of California, Riverside faculty where he taught history from 1954 to 1990.

"Uplifting ruminative memoir by a history professor who went blind in middle age and regained his sight 15 years later. . . . A pleasingly thoughtful, quietly courageous report from one who's lived his life both sighted and blind—but never it seems, with blinders."—Kirkus Reviews

"Told at age 20 that he would eventually become blind, Hine, aided by his wife, coped with diminishing sight, finishing graduate school, progressing in his academic career and even finding ironic humor in the notion of research by a person of low vision. When total blindness came at the age of 50, it lasted 15 years, a not unhappy period, as Hine, now fluent in Braille and assisted by advanced computer technology, lived in a lively world of sound and touch. Then a high-risk operation restored partial vision to one eye, and he was catapulted into a new world where vision was dominant. Despite his joy at independence, he also felt some ambivalence at the loss of the precisely ordered lifestyle blindness had imposed on him. Hine reflects on the published attitudes of blind writers, as he effectively conveys the texture of his well-lived and well-appreciated life."—Publishers Weekly

"Second Sight has meaning for all of us, whether we see well or not well or not at all. . . . Warm subtle, percipient, with strong feelings lightly expressed."—August Frugé


"Fascinating and rich, full of important observations and insight. . . . The sense of lived life, before and after surgery, is vividly conveyed."—Oliver Sacks, MD, author of Seeing Voices: A Journey into the World of the Deaf and An Anthropologist on Mars

"The message of Second Sight and the experiences of Robert Hine can be embraced by anyone who cares for the blind or by those personally confronting the loss of vision. Even readers whose vision is not fading will be reminded of the true gift in sight."—Mitchell Opremcak, MD, The New England Journal of Medicine
Read More >