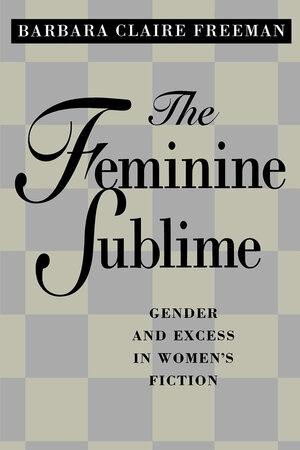 The Feminine Sublime Gender and Excess in Women's Fiction

The Feminine Sublime provides a new and startling insight into the modes and devices employed in the creation of women's fiction since the eighteenth century. Barbara Claire Freeman argues that traditional theorizations of the sublime depend upon unexamined assumptions about femininity and sexual difference, and that the sublime could not exist without misogynistic constructions of "the feminine." Taking this as her starting point, Freeman suggests that the "other sublime" that comes into view from this new perspective not only offers a crucial way to approach representations of excess in women's fiction, but allows us to envision other modes of writing the sublime.

Freeman reconsiders Longinus, Burke, Kant, Weiskel, Hertz, and Derrida while also engaging a wide range of women's fiction, including novels by Chopin, Morrison, Rhys, Shelley, and Wharton. Addressing the coincident rise of the novel and concept of the sublime in eighteenth-century European culture, Freeman allies the articulation of sublime experience with questions of agency and passion in modern and contemporary women's fiction. Arguments that have seemed merely to explain the sublime also functioned to evaluate, domesticate, and ultimately exclude an otherness that is almost always gendered as feminine. Freeman explores the ways in which fiction by American and British women, mainly of the twentieth century, responds to and redefines what the tradition has called "the sublime."

Barbara Claire Freeman is Associate Professor of English and American Literature and Language at Harvard University.

"Freeman has subtly analyzed the gendered drama implicit in several classic theories of the sublime written by men, and then brilliantly paired each theoretical text with a novel written by a woman, a novel in which that theory, and that gendered drama, is enacted, exceeded, and critiqued. This is feminist literary theory at its best."—Barbara E. Johnson, author of The Wake of Deconstruction

"An outstanding book. . . . Freeman's work is the first to link [the theme of empowerment] to the literary critique of the sublime, making possible the 'addition' of women to the list of English and American Romantic writers where they have been puzzlingly invisible."—Diane W. Middlebrook, author of Anne Sexton

"Barbara Claire Freeman radically unmans the discourse of the sublime. She makes explicit the gendered, gendering, and degendered aspects of the traditional discussions of sublimity. The results of her inversive readings are exhilarating—new readings of texts that had been threatened by banalization from simplistic ideological misuse. A brilliant work!"—Hayden White, author of The Content of the Form