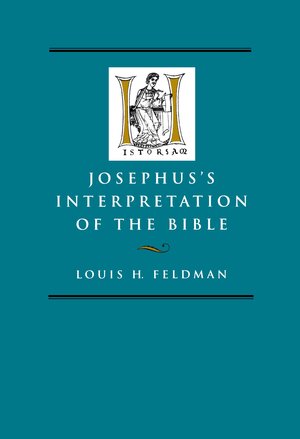 Josephus's Interpretation of the Bible

Josephus (A.D. 37-?100), a pro-Roman Jew closely associated with the emperor Titus, is the earliest systematic commentator on the Bible, as well as one of the foremost historians of the beginning of the Christian era. Politically, Josephus was pro-Roman, and although he had no sympathy for extreme Jewish nationalism, he was a zealous defender of Jewish religion and culture. Louis H. Feldman examines the principles that guided Josephus in his understanding of the Bible, investigating his creative contribution in the rewriting of biblical accounts. This comprehensive study evaluates Josephus as a historian and demonstrates the originality and consistency of his work as an author.

The first part of Feldman's work attempts to understand Josephus's purposes and techniques in retelling the Bible. The second part reviews Josephus's treatment of twelve key biblical figures. In addition to its reevaluation of an important early historian, this unique compendium provides a mine of information on the reassessment of the most important biblical figures.

Louis H. Feldman is Professor of Classics at Yeshiva University. His books include Josephus and Modern Scholarship, 1937-1980 (1984), Jew and Gentile in the Ancient World: Attitudes and Interactions from Alexander to Justinian (1993), and Studies in Hellenistic Judaism (1996).

"Louis Feldman has delivered a hurricane. . . . This book is essential reading for anyone who plans to use Josephus to illuminate a biblical text, early Judaism, the background to early Christianity, or the classical world in general. "—Steve Mason, York University

"The work stands as a testament to Professor Feldman's lifetime of research on Josephus. No one else could write this volume, a tour de force."—Gregory Sterling, Notre Dame University