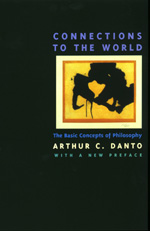 Connections to the World The Basic Concepts of Philosophy, With a new preface

Arthur C. Danto's lucid introduction to the central topics of Western philosophical thought remains an unparalleled guide to problems in metaphysics and epistemology that have engaged philosophers for several millennia. Examining the work of Plato, Berkeley, Descartes, Hume, and Wittgenstein, Danto explores debates about empiricism, the mind/body problem, the nature of matter, and the status of language, consciousness, and scientific explanation. In a new preface to this edition he considers the current relationship between philosophy and the humanities.

Arthur C. Danto is Professor Emeritus of Philosophy at Columbia University and art critic for The Nation. He is a past president of the American Philosophical Association and the author of more than fifteen books, including Encounters and Reflections (California paperback, 1996) and Playing with the Edge: The Photographic Achievement of Robert Mapplethorpe (California, 1995).

PART I I Understanding
10 Vehicles of Understanding
11 Verification
12 Feeling and Meaning
13 Metaethical Controversy
14 Two Views of Language
15 The Empiricist Theory of Understanding
16 Definition and Dialectic
17 Analytic, Synthetic, A priori, A posteriori
18 Totalistic Thought
19 Geometry and Reality

PART III Knowledge
20 The Analysis of Knowledge
21 Doubt, Dream, and Demon
22 Thinking and Certainty
23 Intemalism and Externalism
24 The Ontological Argument
25 The Notion of Existence
26 Representationalism and Idealism
27 Idealism, Realism, and Phenomenalism
28 Matter, the World, and Philosophies of Knowledge
29 Coherence and Reality
30 Reality and Rationality