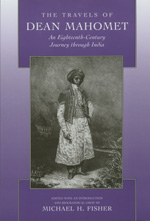 The Travels of Dean Mahomet An Eighteenth-Century Journey through India

This republication of an eighteenth-century travel narrative and autobiography by Dean Mahomet (Deen Mahomed) presents a native Indian view of the history of the British conquest of India. Mahomet (1759-1851) was associated with the English East India Company as a camp-follower, servant, and subaltern officer in the Bengal Army (1769-84). His depiction of the Muslim and Hindu society, rituals, and religious beliefs provides a unique ethnography of South Asia; he also includes descriptions of its urban life, flora, and fauna. Originally published in 1794, Mahomet's work was the first book written and published by an Indian in English. He drew upon the epistolary travel narrative genre to create his own representation of Asia and Asians for his Irish and British audience. The editor, Michael H. Fisher, contextualizes Dean Mahomet's life and work an informative biography. Fisher traces Mahomet's life in India and then as an early Asian immigrant to Britain and convert from Islam to Christianity. After emigrating from India to Cork, Ireland, in 1784, Mahomet soon married an Anglo-Irish woman. Early in the nineteenth century, he moved to London, where he worked briefly for a Scottish nobleman as a therapeutic masseur ("shampooer"). In 1809 Dean Mahomet opened one of the first Indian restaurants in London, which he called the Hindustani Coffee House; it featured hookas (tobacco water-pipes) and curries. In 1814 he moved again, to the resort of Brighton (on the south coast of England), where he made himself a successful entrepreneur and doctor, providing "Oriental medicine" (therapeutic massage and herbal steam baths) to the British public. He became a professional "Shampooing Surgeon," with appointments to King George IV and King William IV, and practiced his healing arts within the Brighton Pavilion and his own establishment, Mahomed's Bath House. Dean Mahomet's writings and life demonstrate that the colonial process was not a unilateral assertion of European imperialism over a passive East; rather, they reveal the ways that Asians represented the Orient to the British public directly, and negotiated their complex relationships with Britons both in colonial India and in Britain itself.

This unusual study combines two books in one: the 1794 autobiographical travel narrative of an Indian, Dean Mahomet, recalling his years as camp-follower, servant, and subaltern officer in the East India Company's army (1769 to 1784); and Michael H. Fisher's portrayal of Mahomet's sojourn as an insider/outsider in India, Ireland, and England. Emigrating to Britain and living there for over half a century, Mahomet started what was probably the first Indian restaurant in England and then enjoyed a distinguished career as a practitioner of "oriental" medicine, i.e., therapeutic massage and herbal steam bath, in London and the seaside resort of Brighton. This is a fascinating account of life in late eighteenth-century India—the first book written in English by an Indian—framed by a mini-biography of a remarkably versatile entrepreneur.

Travels presents an Indian's view of the British conquest of India and conveys the vital role taken by Indians in the colonial process, especially as they negotiated relations with Britons both in the colonial periphery and the imperial metropole.

Connoisseurs of unusual travel narratives, historians of England, Ireland, and British India, as well as literary scholars of autobiography and colonial discourse will find much in this book. But it also offers an engaging biography of a resourceful, multidimensional individual.

Michael H. Fisher is Professor of History at Oberlin College. He is the author of A Clash of Cultures: Awadh, the British, and the Mughals (1987) and Indirect Rule in India: Residents and the Residency System, 1764-1858 (1991).

"A richly documented portrait and a model of historical detective work."—Dane Kennedy, University of Nebraska

A Text and a Life

The Significance of Dean Mahomet's Work

A Guide to This Volume

ONE: THE WORLD OF EIGHTEENTH-CENTURY INDIA

The Mughal Empire and the Regional States

The Diverse Origins of the Bengal Army

The New Model: The Sepoy

TWO: THE TRAVELS OF DEAN MAHOMET

Dean Mahomet Works for a Nabob

The World of Brighton