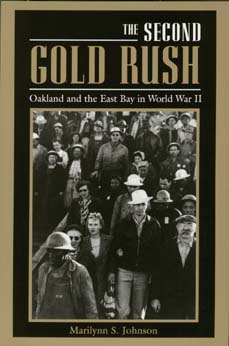 More than any event in the twentieth century, World War II marked the coming of age of America's West Coast cities. Almost overnight, new war industries prompted the mass urban migration and development that would trigger lasting social, cultural, and political changes. For the San Francisco Bay Area, argues Marilynn Johnson, the changes brought by World War II were as dramatic as those brought by the gold rush a century earlier.

Focusing on Oakland, Richmond, and other East Bay shipyard boomtowns, Johnson chronicles the defense buildup, labor migration from the South and Midwest, housing issues, and social and racial conflicts that pitted newcomers against longtime Bay Area residents. She follows this story into the postwar era, when struggles over employment, housing, and civil rights shaped the urban political landscape for the 1950s and beyond. She also traces the cultural legacy of war migration and shows how Southern religion and music became an integral part of Bay Area culture.

Johnson's sources are wide-ranging and include shipyard records, labor histories, police reports, and interviews. Her findings place the war's human drama at center stage and effectively recreate the texture of daily life in workplace, home, and community. Enriched by the photographs of Dorothea Lange and others, The Second Gold Rush makes an important contribution to twentieth-century urban studies as well as to California history.

"At last, a close-in account of California during its moment of rebirth, World War II. . . . A book that helps us to understand California's past and also its present."—James N. Gregory, author of American Exodus