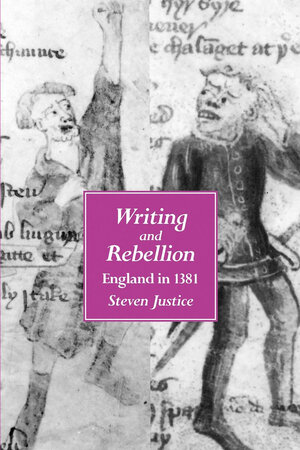 Writing and Rebellion England in 1381

In this compelling account of the "peasants' revolt" of 1381, in which rebels burned hundreds of official archives and attacked other symbols of authority, Steven Justice demonstrates that the rebellion was not an uncontrolled, inarticulate explosion of peasant resentment but an informed and tactical claim to literacy and rule.

Focusing on six brief, enigmatic texts written by the rebels themselves, Justice places the English peasantry within a public discourse from which historians, both medieval and modern, have thus far excluded them. He recreates the imaginative world of medieval villagers—how they worked and governed themselves, how they used official communications in unofficial ways, and how they produced a disciplined insurgent ideology.

Steven Justice is Associate Professor of English at the University of California, Berkeley.

"Original, courageous, and exemplary. . . . This will prove to be one of the most significant and energizing works of recent decades."—David Wallace, editor of The Cambridge History of Medieval English Literature

"A thoroughly accomplished and groundbreaking piece of historicist medievalism, and a 'local' study that resonates in an extraordinarily sensitive and promising way with problems that are worrying and entrancing literary and cultural studies in general. . . . Justice's work powerfully addresses issues that have emerged in the controversies over essentialism and performativity in feminist and ethnicity and queer theory, over alteritism and intimacy in post-colonial theory, and over subversion and containment in new historicism. . . . If Writing and Rebellion were to do no more than recharge the practice of medieval scholarship, draw attention to the textuality of 1381, and establish the importance of 1381 to Ricardian culture as a whole, thereby guiding us to a new reading of that period, it would be a wonderful book; it does all these things, but its implications go even farther. I hope it will be read by many people in many fields thinking seriously about the making of social and literary change."—Louise O. Fradenburg, author of City, Marriage, Tournament: Arts of Rule in Late Medieval Scotland