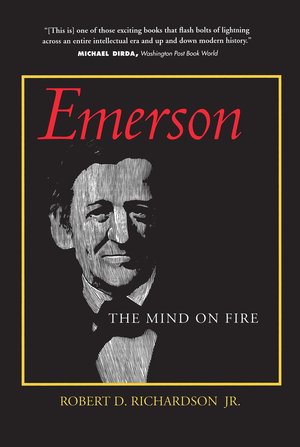 Emerson The Mind on Fire

Ralph Waldo Emerson is one of the most important figures in the history of American thought, religion, and literature. The vitality of his writings and the unsettling power of his example continue to influence us more than a hundred years after his death. Now Robert D. Richardson Jr. brings to life an Emerson very different from the old stereotype of the passionless Sage of Concord. Drawing on a vast amount of new material, including correspondence among the Emerson brothers, Richardson gives us a rewarding intellectual biography that is also a portrait of the whole man.

These pages present a young suitor, a grief-stricken widower, an affectionate father, and a man with an abiding genius for friendship. The great spokesman for individualism and self-reliance turns out to have been a good neighbor, an activist citizen, a loyal brother. Here is an Emerson who knew how to laugh, who was self-doubting as well as self-reliant, and who became the greatest intellectual adventurer of his age.

Richardson has, as much as possible, let Emerson speak for himself through his published works, his many journals and notebooks, his letters, his reported conversations. This is not merely a study of Emerson's writing and his influence on others; it is Emerson's life as he experienced it. We see the failed minister, the struggling writer, the political reformer, the poetic liberator.


The Emerson of this book not only influenced Thoreau, Fuller, Whitman, Dickinson, and Frost, he also inspired Nietzsche, William James, Baudelaire, Marcel Proust, Virginia Woolf, and Jorge Luis Borges. Emerson's timeliness is persistent and striking: his insistence that literature and science are not separate cultures, his emphasis on the worth of every individual, his respect for nature.

Richardson gives careful attention to the enormous range of Emerson's readings—from Persian poets to George Sand—and to his many friendships and personal encounters—from Mary Moody Emerson to the Cherokee chiefs in Boston—evoking both the man and the times in which he lived. Throughout this book, Emerson's unquenchable vitality reaches across the decades, and his hold on us endures.

We are deeply saddened to hear of the passing of Robert D. Richardson Jr. at age 86. Obituaries and announcements have appeared in the New York Times, the Washington Post and the …

Robert D. Richardson Jr. (1934-2020) was also the author of Henry Thoreau: A Life of the Mind (California, 1986), which won the Melcher Prize in 1987. Barry Moser is one of the foremost wood engravers and book illustrators in America.

"Richardson’s 671-page biography of Emerson is a page turner. The adventures are the adventures of a reader. And, of course, a thinker, a writer."—Los Angeles Times

"A worthy addition to the library of books on one of America's foremost thinkers."—New York Times

"Richardson balances the often chilling puritanism of Emerson's writing with a portrait of the man as hungry for friendship, maintaining close relationships with Carlisle, Thoreau, Bronson Alcott and Margaret Fuller; and whose icy doctrine of individualism reflects the loneliness caused by the premature deaths of his beloved first wife, his two younger brothers and numerous friends."—Publishers Weekly

"A captivating account of the originality, creativity, and genius of the American Coleridge."—Library Journal

“An electrifying work . . . a phenomenal piece of portraiture”—New York Newsday

"Emerson: The Mind on Fire is an unusually intelligent and involving book. Richardson himself writes with grace, vigor, acuity, and imagination. No other recent critic of Emerson . . . has written so well. This book is equal to the best American literary biographies we have and is arguably the best single book on Emerson ever written."—Journal of American History

"What Richardson has produced . . . a valuable, perhaps indispensable, paean to the intellectual life: we emerge from a reading of it fairly staggered by Emerson's sustained energy-even through his moments of doubt-and by the uncompromising honesty of Emerson's engagements with himself, with literature, nature, and society."—American Literature

"The Mind on Fire integrates heart and head without ever confusing the two; it presents exciting readings of Emerson's major works; it reveals a productive emotional vitality in ways never before shown; it is learned, accurate, judicious, and comprehensive, crisp in its conclusions, poetic in its language, too respectful of its subject ever to make him stodgy. The book is aptly titled, with its allusion to Emerson's volcanic metaphor for the creative mind, for Richardson's book truly fires the imagination."—New England Quarterly

"One of the great achievements in contemporary American literary studies. . . . Aside from his learning, which is prodigious, Richardson writes a wonderfully fluent, agile prose; he has a poet's sense of nuance and a novelist's grasp of dramatic rhythm; he also displays a positive genius for apt quotation."—John Banville, New York Review of Books

"Richardson's rich and extensive book on Ralph Waldo Emerson is a guide to the fire that burned always at the center of Emerson's life. . . . To read this book is to be touched on the shoulder by a thousand years of poetry and thought. . . . For those who would understand Emerson, it is unforgettable; it is essential."—Mary Oliver, Winner of the Pulitzer Prize for Poetry

"Emerson himself would surely have applauded Robert Richardson's monumental study, which treats the sage's thought not as a set of coldly reasoned propositions but as the continually shifting outcome of a struggle to surmount crisis and tragedy. In the process, Richardson has fashioned our most credible portrait of a vulnerable, driven, fully human Emerson."—Frederick Crews, author of The Sins of the Father

"The best biography I have read in years. Mr. Richardson is just the splendid writer Emerson has long deserved, and he makes the story great-hearted, inclusive, intellectual, and inspiring. I was enthralled."—Edward Hoagland

"A superb work . . . that will quickly come to be regarded as the definitive biography of Emerson. . . . Richardson's greatest achievement is to restore for us the emotional and passionate element of Emerson's life and personality, and to make us understand how significant an element that was. . . . He brings a very complex and interesting man—not just a thinker—to life."—David M. Robinson, author of Emerson and the Conduct of Life

"Scholars and general readers alike will return to this comprehensive and painstaking study for a long time to come."—Joel Porte, editor of Emerson's Essays

"The most readable biography of Emerson ever written and also one of the best from a scholarly standpoint."—Lawrence Buell, Harvard University

"In this magnificent study Emerson stands before us not only as the embodiment of his 'American Scholar' but also as a human mind. Richardson's Emerson is one whom we want to reread, but, more important, also whom we want to know as a friend and mentor."—Philip F. Gura
Read More >

The Student
1. Prologue. 2. Emerson at Harvard. 3. The
March of Mind. 4. Home and Family.
5. The Angel of Death. 6. Scottish Common
Sense. 7 The Brothers Emerson. 8. The Young
Writer. 9. The Paradise of Dictionaries and
Critics. 10. Mme. de Stael and the Other
Germany. Divinity Studies. 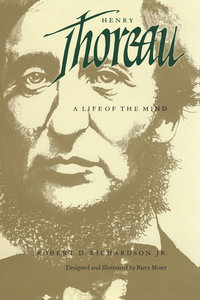