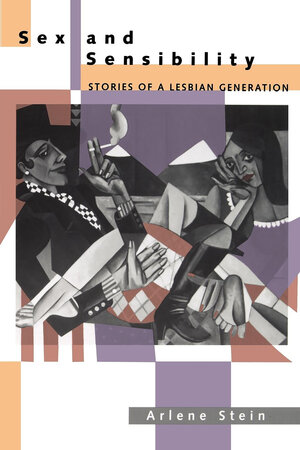 Sex and Sensibility Stories of a Lesbian Generation

Request  an Exam or Desk Copy Recommend to Your Library (PDF) RightsLink Rights and Permissions Read an Excerpt
Sex and Sensibility: Stories of a Lesbian Generation examines shifts in lesbian identity and culture from the 1970s to the present. It explores the complex issues of identity that lesbians have confronted as they have defined themselves in relation to their communities and to society at large. Contributing an essential chapter to the emerging history of the contemporary feminist movement, Sex and Sensibility traces the evolution of the lesbian feminist movement from the bar scene to the flowering of alternative families, showing how a generation of women--baby boomers--transformed the ideals of feminism into a culture and lifestyle. Based largely on in-depth interviews with forty women, the book begins with a look at the cultural context in which lesbians of the baby boom cohort came of age, the 1950s and 60s. It then highlights the stories of three women who formed sexual identities in the context of lesbian feminism. The book documents how a tension between two identity projects--a "minoritizing" project which sought to fix lesbians as a stable minority group, and a "universalizing" project which tried to liberate the "lesbian" in every woman--colored the interactions among women of this cohort. By the late 1970s, a combination of structural and ideological factors conspired to "decenter" lesbian feminism. The baby boom generation was aging and settling into families and careers of various forms. A series of ideological clashes over sexual, racial and other differences exploded. Baby boomers grappled with these and other changes by acknowledging the limits of lesbian identifications and the "multiplicity" of identity. Some found that a lesbian identity no longer suited their needs. An examination of the lives of "ex lesbians" reveals the limitations of the dominant binary conception of sexuality. In the conclusion, the stories of ten women of the "postfeminist generation" are introduced to explain cultural shifts signified by "queer" theory and politics. The book ends with a discussion of the implications of these findings for contemporary sexual politics. The notion that one category of experience, such as sexual identity, could ever completely describe one's relationship to the world is a fiction. But as long as people are categorized and stigmatized according to sexuality, sexual identities are "necessary fictions."
About the Book About the Author Reviews Table of Contents Related Books

In the first book to analyze shifts in lesbian identity, consciousness, and culture from the 1970s to the 1990s, Arlene Stein contributes an important chapter to the study of the women's movement and offers a revealing portrait of the exchange between a radical generation of feminists and its successors. Tracing the evolution of the lesbian movement from the bar scene to the growth of alternative families, Stein illustrates how a generation of women transformed the woman-centered ideals of feminism into a culture and a lifestyle.

Sex and Sensibility relates the development of a "queer" sensibility in the 1990s to the foundation laid by the gay rights and feminist movements a generation earlier. Beginning with the stories of thirty women who came of age at the climax of the 70s women's movement—many of whom defined lesbianism as a form of resistance to dominant gender and sexual norms—Stein explores the complex issues of identity that these women confronted as they discovered who they were and defined themselves in relation to their communities and to society at large.

Sex and Sensibility ends with interviews of ten younger women, members of the post-feminist generation who have made it a fashion to dismiss lesbian feminism as overly idealistic and reductive. Enmeshed in Stein's compelling and personal narrative are coming-out experiences, questions of separatism, work, desire, children, and family. Stein considers the multiple identities of women of color and the experiences of intermittent and "ex" lesbians.

Was the lesbian feminist experiment a success? What has become of these ideas and the women who held them? In answering these questions, Stein illustrates the lasting and profound effect that the lesbian feminist movement had, and continues to have, on contemporary women's definitions of sexual identity.

Arlene Stein is Assistant Professor of Sociology at the University of Oregon and editor of Sisters, Sexperts, Queers (1993).

"In describing brilliantly the great complexity of sexual identity as an individual, a cultural and a political project, Arlene Stein definitively reshapes our understanding of sexuality. No one, after reading Sex and Sensibility, can think that sexual orientation is an obvious matter."—Nancy J. Chodorow, author of Femininities, Masculinities, Sexualities: Freud and Beyond

"Stein does an outstanding job of relating the development of a queer sensibility in the 1990s to the foundation created by gay rights and feminist movements a generation earlier."—Ellen Lewin, author of Lesbian Mothers: Accounts of Gender in American Culture

"At last a work that escapes the stultifying quagmire of the feminist 'sex wars' between social constructionism and essentialism. Arlene Stein is the Jane Austen of lesbian identity politics."—Judith Stacey, author of In the Name of the Family

1. From Old Gay to New: Symbolic Struggles and the
Politics of Lesbian Identity

2. Difference, Desire, and the Self: Three Stories

3· Becoming Lesbian: Identity Work and the
Performance of Sexuality

4· Is She or Isn't She? Constructionism and the
Problem of Commitment

5· Sex, Kids, and Therapy: The Decentering of
Lesbian Feminism

6. Sleeping with the Enemy? Ex-Lesbians and the
Reconstruction of Identity