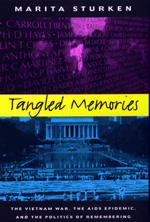 Tangled Memories The Vietnam War, the AIDS Epidemic, and the Politics of Remembering

Analyzing the ways U.S. culture has been formed and transformed in the 80s and 90s by its response to the Vietnam War and the AIDS epidemic, Marita Sturken argues that each has disrupted our conventional notions of community, nation, consensus, and "American culture." She examines the relationship of camera images to the production of cultural memory, the mixing of fantasy and reenactment in memory, the role of trauma and survivors in creating cultural comfort, and how discourses of healing can smooth over the tensions of political events.

Sturken's discussion encompasses a brilliant comparison of the Vietnam Veterans Memorial and the AIDS Quilt; her profound reading of the Memorial as a national wailing wall—one whose emphasis on the veterans and war dead has allowed the discourse of heroes, sacrifice, and honor to resurface at the same time that it is an implicit condemnation of war—is particularly compelling. The book also includes discussions of the Kennedy assassination, the Persian Gulf War, the Challenger explosion, and the Rodney King beating. While debunking the image of the United States as a culture of amnesia, Sturken also shows how remembering itself is a form of forgetting, and how exclusion is a vital part of memory formation.

Marita Sturken is Assistant Professor at the Annenberg School for Communication, University of Southern California.

"A startlingly original and integrated work that considers the ways in which American culture narrates, remembers, and thereby reenacts traumatic events in order to found and refound itself as a national culture. It is a remarkable interdisciplinary study."—Lisa Lowe, author of Immigrant Acts

"Tangled Memories is first-rate: it is exhaustively researched, has an immense command of the literature, and brims with fascinating and original insights. It is a very important book."—James E. Young, author of The Texture of Memory

"This book makes a major contribution to our understanding of U.S. culture in the past two decades."—John Carlos Rowe, coeditor of The Vietnam War and American Culture

Introduction
1 Camera Images and National Meanings
2 The Wall and the Screen Memory:
The Vietnam Veterans Memorial
3 Reenactment and the Making of History:
The Vietnam War as Docudrama
4 Spectacles of Memory and Amnesia:
Remembering the Persian Gulf War
5 AIDS and the Politics of Representation
6 Conversations with the Dead:
Bearing Witness in the AIDS Memorial Quilt
7 Bodies of Commemoration:
The Immune System and HIV