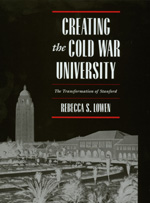 Creating the Cold War University The Transformation of Stanford

Request  an Exam or Desk Copy Recommend to Your Library (PDF) RightsLink Rights and Permissions Read an Excerpt
Rebecca Lowen challenges the conventional wisdom that the post-World War II "multiversity" and the so-called military-industrial-academic complex were the creations of military patrons, on the one hand, and academic scientists, on the other. Focusing closely on Stanford University, the archetype of the cold war university, she details the crucial role played by university administrators, driven by ideology and by institutional needs for prestige and money, to make their university dependent on military, foundation, and industrial patronage during and after the Second World War. She also effectively contests the standard view that the "federal grant university" arose inevitably after World War II in response to new sources of patronage (primarily military). Instead, she points to the critical significance of the Great Depression in creating financial pressures for universities and in stimulating academic administrators to seek new modes of funding institutions of higher learning. Lowen describes how university administrators reoriented academic programs in response to funding opportunities in both the natural sciences (e.g., physics and biology) and the social sciences (particularly, political science); how they redefined the role of university professors, minimizing the importance of undergraduate instruction and rewarding "academic entrepreneurship"; and how they worked with some faculty members to undermine the prewar tradition of departmental autonomy. Lowen also questions the usual depiction of the university as a bastion of consensus during the early cold war and documents considerable faculty resistance to the creation of the cold war university.
About the Book About the Author Reviews Related Books

The "cold war university" is the academic component of the military-industrial-academic complex, and its archetype, according to Rebecca Lowen, is Stanford University. Her book challenges the conventional wisdom that the post-World War II "multiversity" was created by military patrons on the one hand and academic scientists on the other and points instead to the crucial role played by university administrators in making their universities dependent upon military, foundation, and industrial patronage.

Contesting the view that the "federal grant university" originated with the outpouring of federal support for science after the war, Lowen shows how the Depression had put financial pressure on universities and pushed administrators to seek new modes of funding. She also details the ways that Stanford administrators transformed their institution to attract patronage.

With the end of the cold war and the tightening of federal budgets, universities again face pressures not unlike those of the 1930s. Lowen's analysis of how the university became dependent on the State is essential reading for anyone concerned about the future of higher education in the post-cold war era.

Rebecca S. Lowen is currently Visiting Scholar in History at the University of California, San Diego.

"Lowen studies one particular case, carefully and with much new information, then suggests a general interpretation that is more penetrating than anything we have had before on the subject."—Spencer R. Weart, author of Nuclear Fear

"The scholarship is superior; Lowen has been both imaginative and rigorous. She deals with a place limited in size but with problems that are not limited, and she is able to show the connections between the specific and the general."—Sigmund Diamond, author of Compromised Campus