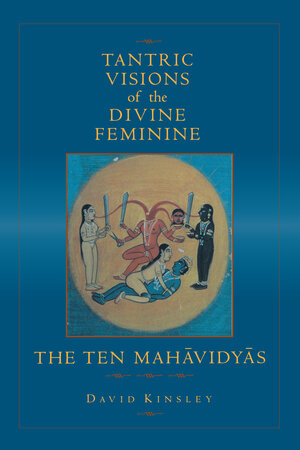 Tantric Visions of the Divine Feminine The Ten Mahavidyas

Ten Hindu goddesses form a group known as the Mahavidyas. This group is important in tantric Hinduism and contains a few very well known goddesses, such a Kali and Kamala (Laksmi), and several obscure goddesses, such a Dhumavati, Bagalamukhi, and Matangi. The book first deals with the group as a whole, discussing several theories and theological structures that might shed light on the goddesses as a unified collective. It then looks at each of the ten goddesses individually, tracing her history, describing her nature, and interpreting her meaning within Hindu tantra. Distinctive characteristics or themes emerge as central in Mahavidya theology and iconography. Several of the goddesses vividly represent inauspicious, polluting, or dangerous qualities. Several seem to represent "antimodels" for women, that is, they display characteristics that are opposed to the virtuous qualities of women as described in Hindu scriptures. Both sex and death feature prominently, and in conjunction with each other, in Mahavidya iconography. The book interprets the Mahavidyas as "awakeners," as spriritual "devices" that tantric adepts might employ to stretch their categories or expand their awareness beyond the conventional. The Mahavidyas have the potential to deconstruct accepted moral, religious, and social paradigms by elevating for reverence goddesses that embody the forbidden,
About the Book About the Author Reviews Table of Contents Related Books

The Hindu pantheon is rich in images of the divine feminine—deities representing a wide range of symbolic, social, and meditative meanings. David Kinsley's new book documents a highly unusual group of ten Hindu tantric goddesses, the Mahavidyas, many of whom are strongly associated with sexuality and violence. What is one to make of a goddess who cuts her own head off, or one who prefers sex with a corpse? The Mahavidyas embody habits, attributes, or identities usually considered repulsive or socially subversive and can be viewed as "antimodels" for women. Yet it is within the context of tantric worship that devotees seek to identify themselves with these forbidding goddesses. The Mahavidyas seem to function as "awakeners"—symbols which help to project one's consciousness beyond the socially acceptable or predictable.

Drawing on a broad range of Sanskrit and vernacular texts as well as extensive research in India, including written and oral interpretations of contemporary Hindu practitioners, Kinsley describes the unusual qualities of each of the Mahavidyas and traces the parallels between their underlying themes. Especially valuable are the many rare and fascinating images he presents—each important to grasping the significance of the goddesses. Written in an accessible, engaging style, Kinsley's book provides a comprehensive understanding of the Mahavidyas and is also an overview of Hindu tantric practice.

David Kinsley is Professor of Religion at McMaster University, Canada. He is the author of Hindu Goddesses: Visions of the Divine Feminine in the Hindu Religious Tradition (California, 1985), and The Sword and the Flute: Kali and Krisna, Dark Visions of the Terrible and Sublime in Hindu Mythology (California, 1975).

"A far-ranging and impressively comprehensive book with exemplary iconographic analyses. Kinsley has drawn together a group of rare, stunning, and fascinating images."—Miranda Shaw, author of Passionate Enlightenment

PART II. THE INDIVIDUAL MAHAVIDYAS
Kali: The Black Goddess
Tara: The Goddess Who Guides through Troubles
Tripura-sundari: She Who Is Lovely in the Three Worlds
Bhuvanegvari: She Whose Body Is the World
Chinnamasta: The Self-Decapitated Goddess
Bhairavi: The Fierce One
Dharnavati: The Widow Goddess
Bagalamukhi: The Paralyzer
Matarigi: The Outcaste Goddess
Kamald: The Lotus Goddess

PART III. CONCLUDING REFLECTIONS
Corpses and Cremation Grounds 233; Skulls and Severed Heads;
Sexuality and Awakened Consciousness; The Conjunction of Death and Sexual Imagery;
The Roles of Women and Reverence for Women; The Potentially Liberating Nature of Social Antimodels