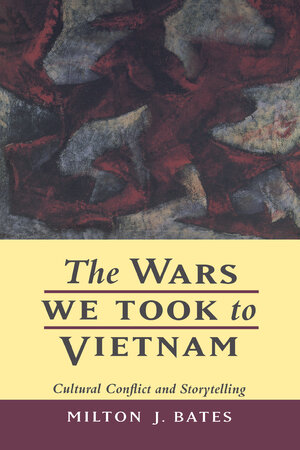 The Wars We Took to Vietnam Cultural Conflict and Storytelling

What Americans refer to as the Vietnam War embraces much more than the conflict with North Vietnam. Milton J. Bates considers the other conflicts that Americans brought to that war: the divisions stemming from differences in race, class, sex, generation, and frontier ideology. In exploring the rich vein of writing and film that emerged from the Vietnam War era, he strikingly illuminates how these stories reflect American social crises of the period.

Some material examined here is familiar, including the work of Michael Herr, Tim O'Brien, Philip Caputo, Susan Sontag, Francis Ford Coppola, and Oliver Stone. Other material is less well known—Neverlight by Donald Pfarrer and De Mojo Blues by A. R. Flowers, for example. Bates also draws upon an impressive range of secondary readings, from Freud and Marx to Geertz and Jameson.

As the products of a culture in conflict, Vietnam memoirs, novels, films, plays, and poems embody a range of political perspectives, not only in their content but also in their structure and rhetoric. In his final chapter Bates outlines a "politico-poetics" of the war story as a genre. Here he gives special attention to our motives—from the deeply personal to the broadly cultural—for telling war stories.

Milton J. Bates is Professor of English at Marquette University. He is the author of Wallace Stevens: A Mythology of Self (California, 1985) and the editor of Sur Plusieurs Beaux Sujects: Wallace Stevens' Commonplace Book (1989) and Opus Posthumous: Poems, Plays, Prose by Wallace Stevens (1989).

"Previous scholarship has established that American storytellers turned Vietnam into a landscape of American myth. Bates's lucid and judicious study . . . is a valuable addition to the conversation regarding the legacy of Vietnam."—John Hellmann, author of American Myth and the Legacy of Vietnam

"An absolutely stunning achievement. Milton Bates presents an incisively accurate analysis of the attitudes that shaped and controlled Americans' perceptions during the 1960s and '70s. He fuses literary analysis with historical scholarship to offer a comprehensive study of American thought and writing before, during, and after the war years. This is a book to be read carefully—and savored."—John Clark Pratt, author of The Laotian Fragments