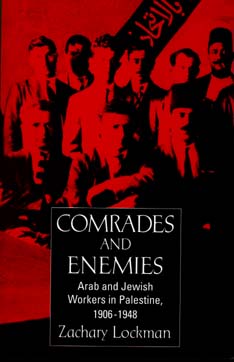 Comrades and Enemies Arab and Jewish Workers in Palestine, 1906-1948

In Comrades and Enemies Zachary Lockman explores the mutually formative interactions between the Arab and Jewish working classes, labor movements, and worker-oriented political parties in Palestine just before and during the period of British colonial rule. Unlike most of the historical and sociological literature on Palestine in this period, Comrades and Enemies avoids treating the Arab and Jewish communities as if they developed independently of each other. Instead of focusing on politics, diplomacy, or military history, Lockman draws on detailed archival research in both Arabic and Hebrew, and on interviews with activists, to delve into the country's social, economic, and cultural history, showing how Arab and Jewish societies in Palestine helped to shape each other in significant ways.

Comrades and Enemies presents a narrative of Arab-Jewish relations in Palestine that extends and complicates the conventional story of primordial identities, total separation, and unremitting conflict while going beyond both Zionist and Palestinian nationalist mythologies and paradigms of interpretation.

Zachary Lockman is Associate Professor in the Department of Near Eastern Languages and Literatures at New York University.

"A unique and welcome perspective which will challenge some and inspire others in the field. . . The scholarship involved, with its fluent familiarity with this extraordinary range of sources—a range which very few historians are capable of using—is remarkable, as is the quality of the prose, and the breadth and maturity of the judgments made. This book will become the standard work in a field where much has been written."—Rashid Khalidi, University of Chicago

"An impressive achievement, subtle, nuanced, and yet firmly grounded in a mass of well-weighted and well-interrogated archival documents and memoirs. It is clearly the best book yet written on Mandatory Palestine."—Juan Cole, University of Michigan