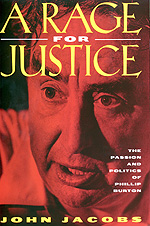 A Rage for Justice The Passion and Politics of Phillip Burton

This political biography of Phillip Burton (1926-1983) is the riveting story of one of the most brilliant, driven, and productive legislators of his—or indeed any—era of American politics. A ruthless and unabashed progressive, Burton terrified his opponents, ran over his friends, forged improbable coalitions, and from 1964 to 1983 became one of the most influential Representatives in the House. He also acquired more raw power than almost any left-liberal politician ever had.

Moving from grassroots campaigns to epic battles in the California state capital, and finally to the very pinnacle of power on Capitol Hill, John Jacobs's inside account of Burton's life shows how politics really works. He demonstrates the exercise of power in the hands of a superb strategist and shows an unheralded master going about his life's work during the glory years of postwar American liberalism.

Burton was an unforgettable, uncontrollable figure whose relentless day-and-night politicking distilled the raw essence of American politics. Jacobs brings to life Burton's seething, perpetual sense of outrage, gargantuan appetites, and dedication to the disenfranchized. Animated by a sometimes frightening drive for power—his only modern counterpart is Lyndon Johnson—Burton played a pivotal role in California and U.S. politics, championing welfare and civil rights, landmark labor legislation, environmentalism and congressional reform. His achievements included the groundbreaking black lung bill for miners and their families; Supplemental Social Security for the aged, blind, and disabled; and helping to secure America's extensive national park system.

Burton's failures were equally dramatic: in 1976, at the height of his power, he lost, by one vote, the chance to become House Majority Leader. Had he won this critical political fight, he no doubt would have become Speaker of the House.

Jacobs's account is based on Burton's personal papers and hundreds of interviews with people at every stage of his life, including four Democratic Speakers of the House. The result is a book that brilliantly demonstrates how one person can make a difference in public life.

John Jacobs is Political Editor and columnist for the McClatchy newspapers based at the Sacramento Bee. He spent a year reporting for the Washington Post and fifteen years reporting for the San Francisco Examiner, his last seven years as Chief Political Writer. He is the coauthor, with Tim Reiterman, of Raven: The Untold Story of Rev. Jim Jones and His People (1982).

"Nobody is perfect—certainly not the late Phillip Burton. Congressman Burton loved power and pursued it egregiously. He had a terrible temper. He was sometimes hasty and imprudent. Yet he was also a great legislator: great in his vision, great in his defense of working people, great in his passion for the environment. Few members of Congress have wielded the influence or left behind the legacy of this towering, tumultuous parliamentarian. Now, thanks to John Jacobs, there is a biography to match the depth and intensity of the man."—Kevin Starr, State Librarian of California

"There was no more compelling political figure in the America of the 1960s and 1970s than California's Phillip Burton and now John Jacobs has written a book that fits the man—big, boisterous, insightful, and compelling. Jacobs has captured Burton and has captured the fascinating politics of the Bay Area, California, and the House of Representatives, all in one terrific package. This is political biography at its best."—Norman J. Ornstein, American Enterprise Institute

"Phil Burton, a prodigious overachiever, has inspired a prodigious book, filled with life and with the colorful stuff of politics. John Jacobs understands the ins and outs of Capitol Hill better than most political writers, and he understands the California political scene that Phil Burton inhabited better than anybody."—Nelson W. Polsby, author of Congress and the Presidency

"An extraordinary political biography by a first-rate political journalist. It is a compelling, critical, adoring, and exeptionally well-researched account of the life and times of one of the nation's most important contemporary politicians. John Jacobs shows us what a gifted insider who was proud of being a consummate politician can accomplish when he masters his profession. But Jacobs does more than that. . . he excels at portraying the man, with all his weaknesses, as well as the politician with his strengths."—Lou Cannon, author of President Reagan: The Role of a Lifetime