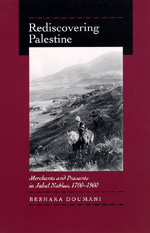 Drawing on previously unused primary sources, this book paints an intimate and vivid portrait of Palestinian society on the eve of modernity. Through the voices of merchants, peasants, and Ottoman officials, Beshara Doumani offers a major revision of standard interpretations of Ottoman history by investigating the ways in which urban-rural dynamics in a provincial setting appropriated and gave meaning to the larger forces of Ottoman rule and European economic expansion. He traces the relationship between culture, politics, and economic change by looking at how merchant families constructed trade networks and cultivated political power, and by showing how peasants defined their identity and formulated their notions of justice and political authority.

Original and accessible, this study challenges nationalist constructions of history and provides a context for understanding the Palestinian-Israeli conflict. It is also the first comprehensive work on the Nablus region, Palestine's trade, manufacturing, and agricultural heartland, and a bastion of local autonomy. Doumani rediscovers Palestine by writing the inhabitants of this ancient land into history.

Beshara Doumani is Assistant Professor of History at the University of Pennsylvania.