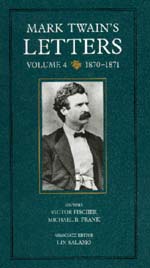 "You ought to see Livy & me, now-a-days—you never saw such a serenely satisfied couple of doves in all your life. I spent Jan 1, 2, 3 & 5 there, & left at 8 last night. With my vile temper & variable moods, it seems an incomprehensible miracle that we two have been right together in the same house half the time for a year & a half, & yet have never had a cross word, or a lover's 'tiff,' or a pouting spell, or a misunderstanding, or the faintest shadow of a jealous suspicion. Now isn't that absolutely wonderful? Could I have had such an experience with any other girl on earth? I am perfectly certain I could not. . . . We are to be married on Feb. 2d."

So begins Volume 4 of the letters, with Samuel Clemens anticipating his wedding to Olivia L. Langdon. The 338 letters in this volume document the first two years of a loving marriage that would last more than thirty years. They recount, in Clemens's own inimitable voice, a tumultuous time: a growing international fame, the birth of a sickly first child, and the near-fatal illness of his wife.

At the beginning of 1870, fresh from the success of The Innocents Abroad, Clemens is on "the long agony" of a lecture tour and planning to settle in Buffalo as editor of the Express. By the end of 1871, he has moved to Hartford and is again on tour, anticipating the publication of Roughing It and the birth of his second child. The intervening letters show Clemens bursting with literary ideas, business schemes, and inventions, and they show him erupting with frustration, anger, and grief, but more often with dazzling humor and surprising self-revelation. In addition to Roughing It, Clemens wrote some enduringly popular short pieces during this period, but he saved some of his best writing for private letters, many of which are published here for the first time.

Victor Fischer, Michael B. Frank, and Lin Salamo are editors with the Mark Twain Project at The Bancroft Library, University of California, Berkeley.