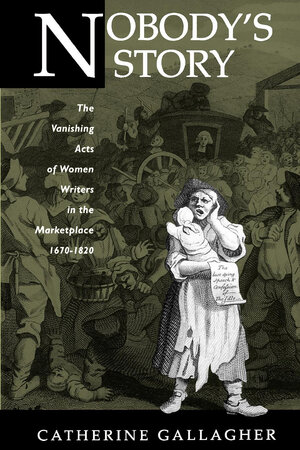 Nobody's Story The Vanishing Acts of Women Writers in the Marketplace, 1670-1920

Exploring the careers of five influential women writers of the Restoration and eighteenth century, Catherine Gallagher reveals the connections between the increasing prestige of female authorship, the economy of credit and debt, and the rise of the novel. The "nobodies" of her title are not ignored, silenced, or anonymous women. Instead, they are literal nobodies: the abstractions of authorial personae, printed books, intellectual property rights, literary reputations, debts and obligations, and fictional characters. These are the exchangeable tokens of modern authorship that lent new cultural power to the increasing number of women writers through the eighteenth century. Women writers, Gallagher discovers, invented and popularized numerous ingenious similarities between their gender and their occupation. The terms "woman," "author," "marketplace," and "fiction" come to define each other reciprocally.

Gallagher analyzes the provocative plays of Aphra Behn, the scandalous court chronicles of Delarivier Manley, the properly fictional nobodies of Charlotte Lennox and Frances Burney, and finally Maria Edgeworth's attempts in the late eighteenth century to reform the unruly genre of the novel.

Catherine Gallagher is Professor of English at the University of California, Berkeley. She is the author of The Industrial Reformation of English Fiction: Social Discourse and Narrative Form, 1832-67 (1985).

"A superb book. . . . A scintillating, continuously rewarding reflection on authorship and its place in the modern world. This is a study in the great tradition of Ian Watt's The Rise of the Novel: both a brilliant work of literary scholarship and an invigorating report on modernity itself."—Terry Castle, author of The Apparitional Lesbian

"An exemplary instance of what many have been clamoring for: a rigorous cultural study of literature."—William B. Warner, author of Reading Clarissa

1. Who Was That Masked Woman? The Prostitute and the Playwright in the Works of Aphra Behn
2. The Author-Monarch and the Royal Slave: Oroonoko and the Blackness of Representation
3. Political Crimes and Fictional Alibis: The Case of Delarivier Manley
4. Nobody's Credit: Fiction, Gender, and Authorial Property in the Career of Charlotte Lennox
5. Nobody's Debt: Frances Burney's Universal Obligation
6. The Changeling's Debt: Maria Edgeworth's Productive Fictions