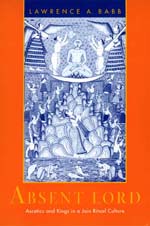 Absent Lord Ascetics and Kings in a Jain Ritual Culture

What does it mean to worship beings that one believes are completely indifferent to, and entirely beyond the reach of, any form of worship whatsoever? How would such a relationship with sacred beings affect the religious life of a community? Using these questions as his point of departure, Lawrence A. Babb explores the ritual culture of image-worshipping Svetambar Jains of the western Indian states of Gujarat and Rajasthan.

Jainism traces its lineages back to the ninth century B.C.E. and is, along with Buddhism, the only surviving example of India's ancient non-Vedic religious traditions. It is known and celebrated for its systematic practice of non-violence and for the intense rigor of the asceticism it promotes. A unique aspect of Babb's study is his linking of the Jain tradition to the social identity of existing Jain communities.

Babb concludes by showing that Jain ritual culture can be seen as a variation on pan-Indian ritual patterns. In illuminating this little-known religious tradition, he demonstrates that divine "absence" can be as rich as divine "presence" in its possibilities for informing a religious response to the cosmos.

Lawrence A. Babb is Professor of Anthropology at Amherst College and author of Redemptive Encounters: Three Modern Styles in the Hindu Tradition (California, 1986).