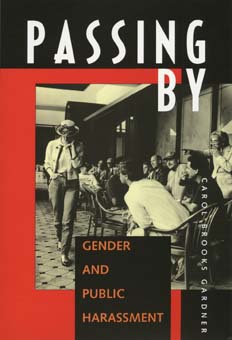 Passing By Gender and Public Harassment

Catcalls, wolf whistles, verbal slurs, pinches, stalking—virtually every woman has experienced some form of unwanted public attention by men. Off the street, in semi-public places such as restaurants and department stores, women often suffer the insult of being passed over by employees eager to serve men. How pervasive is this behavior? How dangerous can it be? What, if anything, should be done about it?

Passing By, an illuminating, unsettling work, explores the important yet little-examined issue of gender-related public harassment. Based on extensive research—including in-depth interviews with nearly five-hundred midwestern women and men—it documents the many types of indignity visited on women in public places. As Carol Brooks Gardner demonstrates, these indignities cross all lines of age, class, and ethnicity and follow a typical pattern whereby a man or men take advantage of a woman's momentary or permanent vulnerability. Beyond describing the scope and variety of harassing behaviors, the book investigates the different ways women and men respond to and interpret them.

Gardner concludes, provocatively, that gender-based public harassment exerts a powerful control over women's feelings of comfort in the towns and communities where they live and work. Further, she defines it as a new category of social problem that shares much in common with sexual harassment and, in its more menacing form, requires legal remedy.

"Examines the minute, seemingly inconsequential violations of public civility that often occur in encounters between strangers in contemporary American society. Drawing on a wealth of observations and interviews, Gardner insightfully and sensitively examines the structure and processes of public harassment which women and others regularly encounter. In so doing. she extends the social scientific concern with harassment from workplace to public place encounters, deepening it in the process."—Robert M. Emerson, University of California, Los Angeles

"A compelling and important book. Every reader will recognize the humiliations, conflicts, and ambiguous encounters that constitute public harassment. Gardner provides fresh and telling insight into seemingly trivial but enormously consequential daily experiences. She is alert to complex relations between gender and race, sexual orientation, and disability in the construction of public encounters. Her articulation of double-binds and everyday dilemmas has practical payoff for efforts to create a safe and mutually respectful society."—Barrie Thorne, author of Gender Play

"A unique study that will be a paradigm for others. . . . Its contributions to the sociology of everyday life and to the understanding of public encounters and harassment are unparalleled."—Douglas Maynard, University of Indiana, Bloomington