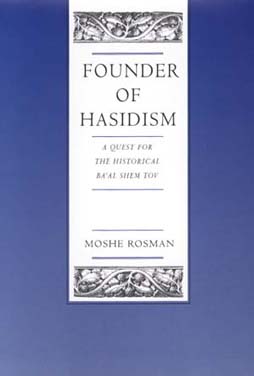 Founder of Hasidism A Quest for the Historical Ba'al Shem Tov

This book goes farther than any previous work in uncovering the historical Israel ben Eliezer—known as the Ba'al Shem Tov, or the Besht—the eighteenth-century Polish-Jewish mystic who profoundly influenced the shape of modern Judaism. As the progenitor of Hasidism, the Ba'al Shem Tov is one of the key figures in Jewish history; to understand him is to understand an essential element of modern Jewish life and religion.

Because evidence about his life is scanty and equivocal, the Besht has long eluded historians and biographers. Much of what is believed about him is based on stories compiled more than a generation after his death, many of which serve to mythologize rather than describe their subject. Rosman's study casts a bright new light on the traditional stories about the Besht, confirming and augmenting some, challenging others. By concentrating on accounts attributable directly to the Besht or to contemporary eyewitnesses, Rosman provides a portrait drawn from life rather than myth. In addition, documents in Polish and Hebrew discovered by Rosman during the research for this book enable him to give the first detailed description of the cultural, social, economic, and political context of the Ba'al Shem Tov's life.

Moshe Rosman teaches Jewish History at Bar Ilan University and is the author of The Lords' Jews: Magnate-Jewish Relations in the Polish-Lithuanian Commonwealth (1990), among other works.

"The only scholarly book, in any language, that deals with the figure of the Besht in a detailed, profound, and very documented manner. Dr. Rosman has mapped the background of the life and activity of the Besht, using unknown material, penetrating analysis, and a broader perspective regarding Jewish history in Poland. . . . A very remarkable achievement."—Moshe Idel, Hebrew University

"The subject is crucial; the approach is bold and brilliantly chosen. The result is a persuasive revision of a fundamental chapter in the Jewish experience."—Gershon Hundert, McGill University