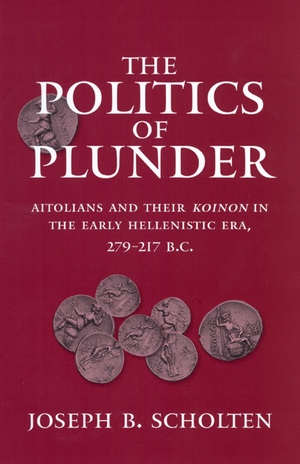 The Politics of Plunder Aitolians and their Koinon in the Early Hellenistic Era, 279-217 B.C.

Between 279 and 229 B.C., the Aitolian koinon, a federation of mountain cantons in west central Greece, expanded to incorporate many of the neighboring lands and peoples lying between the Adriatic and Aegean Seas. This new political configuration contributed to the development of modern systems of federal democracy based on proportional representation. Despite these institutional advances, the Aitolians and their polity are reviled in the ancient historical tradition, which views them as backward, semi-barbarous brigands.

The Politics of Plunder is the first English-language book in over a century to examine the political history of the Aitolian koinon in its era of expansion. Joseph Scholten presents a chronological reconstruction of the koinon's course of expansion, synthesizing a number of recent studies covering Aitolian topography, epigraphy, and institutional development that help to compensate for deficiencies in the ancient narrative record. His study is the first to ask how a people and a polity so detested by their contemporaries succeeded in making such fundamental contributions to their regional political culture.

Scholten's careful investigation charts a middle course that neither whitewashes the Aitolians nor credulously accepts the biased ancient tradition. This balanced approach provides a much-needed fresh perspective on the Aitolians and their koinon. Discussing the history of the ancient Aegean Greek world and the political, economic, and social history of the Hellenistic Era, this book will interest anyone concerned with those subjects or fascinated by the development of ancient Greek political institutions and theories, particularly federalism.

Joseph B. Scholten is Associate Professor of History at Michigan State University.

"This book does genuinely fill a significant gap . . . and will serve as a reliable guide to the sources and scholarship on Greece in the third century."—Stanley Burstein

"The Aetolians of the 3rd cent. BCE (even more than the Macedonians, if not quite at the level of the Gauls) were the bogey-men and whipping-boys for every Greek state, from Athens to Achaea, that considered itself more civilized. Polybius in particular couldn't stand them. Primitive, treacherous, murderous, piratical—the epithets pile up like snow on Helicon. Yet, paradoxically, these sub-Homeric ruffians also instituted a remarkably modern-sounding democratic federation, which even (despite Greek ethnic exclusiveness) offered membership to non-Aetolian groups. Resolving the paradox has stimulated Scholten to produce a really wonderful book. He has reinforced the scanty literary sources with some of the most thorough epigraphical and numismatic work I have ever seen in a work of scholarship. Best of all, he has walked every inch of Aetolia and knows its geography backwards. His research (while not palliating the Aetiolians' "predatory economic self-service," a nice phrase) sets their federation in its political context as never before, and, what's more, does so in elegant and drily ironic prose. The Politics of Plunder invites comparison with N.G.L. Hammond's Epirus, and will, I suspect, in the long run prove a more durable and substantial achievement."—Peter Green