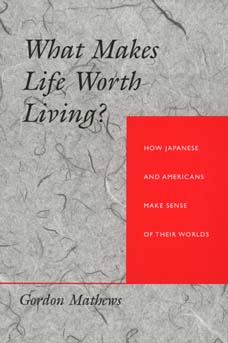 What Makes Life Worth Living? How Japanese and Americans Make Sense of Their Worlds

Here is an original and provocative anthropological approach to the fundamental philosophical question of what makes life worth living. Gordon Mathews considers this perennial issue by examining nine pairs of similarly situated individuals in the United States and Japan. In the course of exploring how people from these two cultures find meaning in their daily lives, he illuminates a vast and intriguing range of ideas about work and love, religion, creativity, and self-realization.

Mathews explores these topics by means of the Japanese term ikigai, "that which most makes one's life seem worth living." American English has no equivalent, but ikigai applies not only to Japanese lives but to American lives as well. Ikigai is what, day after day and year after year, each of us most essentially lives for.

Through the life stories of those he interviews, Mathews analyzes the ways Japanese and American lives have been affected by social roles and cultural vocabularies. As we approach the end of the century, the author's investigation into how the inhabitants of the world's two largest economic superpowers make sense of their lives brings a vital new understanding to our skeptical age.

Gordon Mathews is Lecturer in the Department of Anthropology at the Chinese University of Hong Kong.

"A unique and provocative contribution to the fundamental question of what makes life worth living. Mathews works creatively with the similarities and differences in the United States and Japan to shed light on cultural values in the two societies."—John L. Caughey, author of Imaginary Social Worlds

"Amidst trade wars, when Japanese workers are made into robots and trade negotiators into modern-day samurai, one longs for a sense of what Japanese humans are like. Gordon Mathews provides the answer. . . . His work is penetrating and rings true."—Ezra F. Vogel, author of Japan as Number One

"An extraordinary book. Mathews's analysis of each pair of narratives is clear, delightful, and satisfying."—Takie Sugiyama Lebra, author of Above the Clouds: Status Culture of the Modern Japanese Nobility

Part One: The Cultural Foundations of Ikigai

Introduction: What Makes Life Worth Living?
1. The Varieties of Ikigai in Japan
2. Individualism, Community, and Conformity
in the United States
3· The Comparison of Japanese and American Selves

Part Two: Ikigai in Japanese and American Lives
4· Ikigai in Work and Family
Ikigai and Gender
5· Ikigai in Past and Future
Ikigai and Dreatns
6. Ikigai in Creation and Religion
Ikigai and Significance