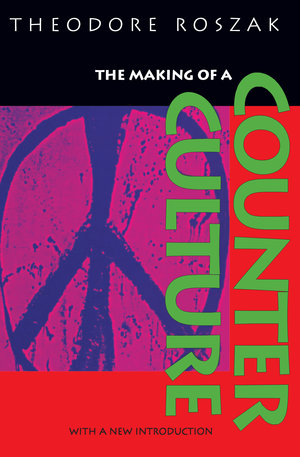 The Making of a Counter Culture Reflections on the Technocratic Society and Its Youthful Opposition, With a new introduction

When it was published twenty-five years ago, this book captured a huge audience of Vietnam War protesters, dropouts, and rebels—and their baffled elders. Theodore Roszak found common ground between 1960s student radicals and hippie dropouts in their mutual rejection of what he calls the technocracy—the regime of corporate and technological expertise that dominates industrial society. He traces the intellectual underpinnings of the two groups in the writings of Herbert Marcuse and Norman O. Brown, Allen Ginsberg and Paul Goodman. In a new introduction, Roszak reflects on the evolution of counter culture since he coined the term in the sixties.

Alan Watts wrote of The Making of a Counter Culture in the San Francisco Chronicle in 1969, "If you want to know what is happening among your intelligent and mysteriously rebellious children, this is the book. The generation gap, the student uproar, the New Left, the beats and hippies, the psychedelic movement, rock music, the revival of occultism and mysticism, the protest against our involvement in Vietnam, and the seemingly odd reluctance of the young to buy the affluent technological society—all these matters are here discussed, with sympathy and constructive criticism, by a most articulate, wise, and humane historian."

Theodore Roszak is Professor of History at California State University, Hayward. Among his many books are The Memoirs of Elizabeth Frankenstein (1995), The Cult of Information: A Neo-Luddite Treatise on High-Tech, Artificial Intelligence, and the True Art of Thinking (California, 1994) and, as coeditor, Ecopsychology: Restoring the Earth, Healing the Mind (1995).

Introduction to the 1995 Edition
Preface
I. Technocracy's Children
II. An Invasion of Centaurs
III. The Dialectics of Liberation: Herbert
Marcuse and Norman Brown
N. Journey to the East . .. and Points
Beyond: Allen Ginsberg and Alan
Watts
V. The Counterfeit Infinity: The Use and
Abuse of Psychedelic Experience
VI. Exploring Utopia: The Visionary Sociology
of Paul Goodman
VII. The Myth of Obiective Consciousness
VIII. Eyes of Flesh, Eyes of Fire
Appendix: Obiectivity Unlimited
Bibliographical Notes
Acknowledgments 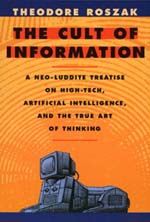 The Cult of Information