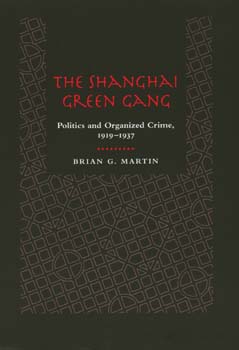 In a remarkable example of history as detective work, Brian Martin pieces together the fascinating and complex story of the Shanghai Green Gang and its charismatic leader, Du Yuesheng. Martin sifts through a variety of fragmentary and at times contradictory evidence—from diplomatic dispatches to memoirs to police reports—to produce the most comprehensive account of this chaotic period of Chinese history. In analyzing the Green Gang's system of organized crime in Shanghai, the author broadens our understanding of a critical aspect of Chinese urban history and sheds light on the history of drug trafficking and organized crime worldwide.

Martin argues that the Green Gang, the most powerful secret society in China during the first half of the twentieth century, was a resilient social organization that adapted successfully to the complex environment of a modernizing urban society. Illustrating its multilayered and complex relations with the bourgeoisie, the industrial proletariat, and the foreign and domestic political authorities, Martin demonstrates how these factors led to the Green Gang's absorption into the corporate state system after 1932.