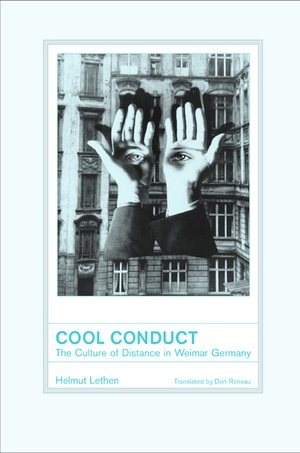 Cool Conduct The Culture of Distance in Weimar Germany

Cool Conduct is an elegant interpretation of attitudes and mentalities that informed the Weimar Republic by a scholar well known for his profound knowledge of this period. Helmut Lethen writes of "cool conduct" as a cultivated antidote to the heated atmosphere of post-World War I Germany, as a way of burying shame and animosity that might otherwise make social contact impossible.

Helmut Lethen is Professor of German at the University of Rostock and author of books on Brecht and on New Objectivity in Germany. Don Reneau is an independent translator living in Chicago.

"Lethen brilliantly interprets New Objectivity as a tactical response to the need for a 'code of conduct' in an age of anxiety about values and normative judgments. Moving effortlessly between analysis of philosophical texts and literary works, he charts an increasingly popular field of cultural studies: how cultural discourses shape behavior. One of the most original and daring contributions to Weimar scholarship and to the study of modernity in general in a decade."—Anton Kaes, University of California, Berkeley

"Lethen is probably the most original and outstanding scholar writing in German today about Weimar literature and culture. He traces the figure of the 'cold persona' as part of a broader discourse of anthropological, ethical, and aesthetic dimensions. The book is written in a personal voice, witty, lucid, and unpretentious."—Miriam Hansen, University of Chicago