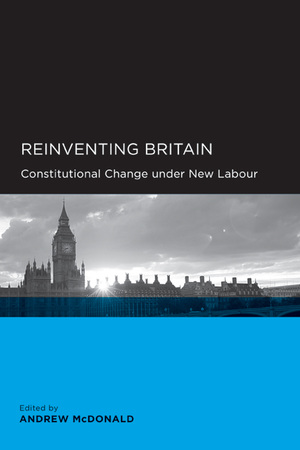 Contrary to popular myth, Britain does have a constitution, one that is uncodified and commanded little political interest for most of the twentieth century. In the late 1990s, Tony Blair's New Labour Government launched a program of reform that was striking in its ambition. Reinventing Britain tells the story of Britain's constitutional reform and weighs its long-term significance, with essays both by officials who worked on the reforms and by other leading commentators and academics from Britain and North America.

Andrew McDonald is a UK civil servant. From 2003 to 2005 he ran the government's constitutional reform program. In 2005–6 he was a Fulbright Fellow at the University of California, Berkeley.

“For an observer of Europe from abroad, this book is pure gold. It is a thorough and highly accessible account of both the way New Labour came to adopt its agenda of constitutional change, and the three big pieces of the puzzle: devolution, judicial reform, and Europe. The authority of the contributors and their grasp of the historical flow of events make it easy to recommend to anyone interested in the ongoing saga of political change in Britain.” —Nelson W. Polsby, co-author of British Government and Its Discontents

“The constitutional initiatives undertaken during Tony Blair's tenure as prime minister are as little understood as they are significant. That is especially the case in the United States. Those initiatives represent profound change at the heart of Britain's governing structure. Blair's legacy will be shaped in large part by the Iraq war, but the authors of this important book remind us that there was much more to his government that should not be overlooked.”—Dan Balz, Washington Post National Political Correspondent