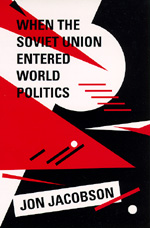 The dissolution of the Soviet Union has aroused much interest in the USSR's role in world politics during its 74-year history and in how the international relations of the twentieth century were shaped by the Soviet Union. Jon Jacobson examines Soviet foreign relations during the period from the end of the Civil War to the beginning of the first Five-Year Plan, focusing on the problems confronting the Bolsheviks as they sought to promote national security and economic development. He demonstrates the central importance of foreign relations to the political imagination of Soviet leaders, both in their plans for industrialization and in the struggle for supremacy among Lenin's successors.

Jacobson adopts a post-Cold War interpretative stance, incorporating glasnost and perestroika-era revelations. He also considers Soviet relations with both Europe and Asia from a global perspective, integrating the two modes of early Soviet foreign relations—revolution and diplomacy—into a coherent discussion. Most significantly, he synthesizes the wealth of information that became available to scholars since the 1960s. The result is a stimulating work of international history that interfaces with the sophisticated existing body of scholarship on early Soviet history.

Jon Jacobson is Professor of History at the University of California, Irvine.