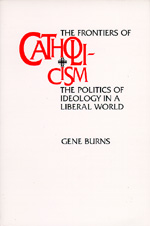 Why does the Catholic Church take a politically conservative stance on some issues, such as abortion and birth control, while on others, such as social programs and nuclear policy, it resembles the left? Why do some Catholic groups reject the legitimacy of Church hierarchy and yet choose to remain within its fold? To explain these apparent contradictions, Gene Burns examines the origins of contemporary diversity and conflict in the Catholic Church as well as the processes of ideological change.

With valuable insights into the American Catholic Church, the modern papacy, and the Latin American Church, The Frontiers of Catholicism is as much a political study of ideological dynamics as it is an institutional study of religious change.

Gene Burns is Assistant Professor of Sociology at Princeton University.

Acknowledgments
Popes, Councils, and Selected Documents since Vatican I
Abbreviations
1. INTRODUCTION: CATHOLIC IDEOLOGY
2. THE PAPAL STRUGGLE WITH LIBERALISM
3. CHANGE AND AMBIGUITY AT VATICAN II
4. IDEOLOGICAL BOUNDARIES IN A MINORITY CHURCH
5. COLLEGIALITY AND CATHOLIC SOCIAL TEACHING IN THE AMERICAN CONTEXT
6. RADICALIZATION AT THE PERIPHERY OF POWER
7. CATHOLICISM AND POLITICS IN LATIN AMERICA: A COMPARATIVE PERSPECTIVE
8. CONCLUSION: THE CATHOLIC CHURCH AND IDEOLOGICAL CHANGE
Notes
Glossary
Bibliography
Index