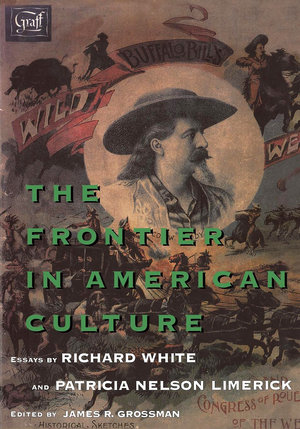 The Frontier in American Culture

Log cabins and wagon trains, cowboys and Indians, Buffalo Bill and General Custer. These and other frontier images pervade our lives, from fiction to films to advertising, where they attach themselves to products from pancake syrup to cologne, blue jeans to banks. Richard White and Patricia Limerick join their inimitable talents to explore our national preoccupation with this uniquely American image.

Richard White examines the two most enduring stories of the frontier, both told in Chicago in 1893, the year of the Columbian Exposition. One was Frederick Jackson Turner's remarkably influential lecture, "The Significance of the Frontier in American History"; the other took place in William "Buffalo Bill" Cody's flamboyant extravaganza, "The Wild West." Turner recounted the peaceful settlement of an empty continent, a tale that placed Indians at the margins. Cody's story put Indians—and bloody battles—at center stage, and culminated with the Battle of the Little Bighorn, popularly known as "Custer's Last Stand." Seemingly contradictory, these two stories together reveal a complicated national identity.

Patricia Limerick shows how the stories took on a life of their own in the twentieth century and were then reshaped by additional voices—those of Indians, Mexicans, African-Americans, and others, whose versions revisit the question of what it means to be an American.

Generously illustrated, engagingly written, and peopled with such unforgettable characters as Sitting Bull, Captain Jack Crawford, and Annie Oakley, The Frontier in American Culture reminds us that despite the divisions and denials the western movement sparked, the image of the frontier unites us in surprising ways.

"In this beautifully illustrated volume, two of the nation's leading western historians offer brilliant and provocative insight into why the frontier has had such a longstanding and problematic hold on American national thought. Their book is a pleasure both to read and to look at and deserves a wide audience."—William Cronon, Frederick Jackson Turner Professor of History, University of Wisconsin, Madison

"The authors . . . demonstrate a keen awareness of the critical and complex relationship between history and legend in the American West and its consequences for modern Americans. Finely crafted with scholarship and good humor, their thoughtful and provocative ruminations lend fresh insight into the shaping and propagation of America's frontier legacy."—B. Byron Price, National Cowboy Hall of Fame and Western Heritage Center