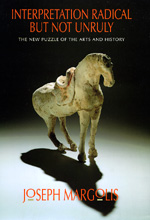 With this challenging work, Joseph Margolis continues the project begun in The Flux of History and the Flux of Science (California, 1993). Tackling one of philosophy's master themes, he develops the controversial thesis that the world is a flux. Here he applies this doctrine to Western theories of history and the interpretation of cultural phenomena—offering the first sustained analysis of the logic, methodology, and metaphysics of interpretation committed to a thoroughgoing relativism and the historicized structure of cultural phenomena. Versed in Anglo-American and Continental philosophy, Margolis draws on the best views of Western philosophy to investigate a topic regularly ignored in that tradition. The result is the surprising synthesis of two historically antipathetic approaches to philosophy.

Joseph Margolis, Laura H. Carnell Professor of Philosophy at Temple University, is the author of more than thirty books.

"The wide ranging investigation presented in Margolis's books provide a comprehensive and unequalled view of intellectual and artistic pursuits. . . . Some readers will be convinced by the author's arguments, others will be prompted to provide a better defense of their own views; all will gain by arguing with these books."—Laurent Stern, Rutgers University