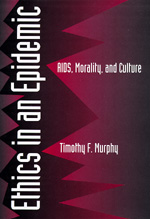 Ethics in an Epidemic AIDS, Morality, and Culture

AIDS strikes most heavily at those already marginalized by conventional society. With no immediate prospect of vaccination or cure, how can liberty, dignity, and reasoned hope be preserved in the shadow of an epidemic? In this humane and graceful book, philosopher Timothy Murphy offers insight into our attempts—popular and academic, American and non-American, scientific and political—to make moral sense of pain.

Murphy addresses the complex moral questions raised by AIDS for health-care workers, politicians, policy makers, and even people with AIDS themselves. He ranges widely, analyzing contrasting visions of the origin and the future of the epidemic, the moral and political functions of obituaries, the uncertain value of celebrity involvement in anti-AIDS education, the functional uses of AIDS in the discourse of presidential campaigns, the exclusionary function of HIV testing for immigrants, the priority given to AIDS on the national health agenda, and the hypnotic publicity given to "innocent" victims.

Murphy's discussions of the many social and political confusions about AIDS are unified by his attempt to articulate the moral assumptions framing our interpretations of the epidemic. By understanding those assumptions, we will be in a better position to resist self-serving and invidious moralizing, reckless political response, and social censure of the sick and the dying.

Timothy F. Murphy is Assistant Professor of Philosophy in the Biomedical Sciences at the University of Illinois College of Medicine. He is editor (with Marc Lappé) of Justice and the Human Genome Project (California, 1994) and (with Suzanne Poirier) of Writing AIDS: Gay Literature, Language, and Analysis (1993).