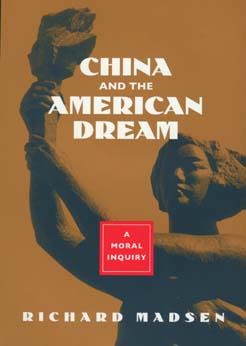 China and the American Dream A Moral Inquiry

From the "Red Menace" to Tiananmen Square, the United States and China have long had an emotionally tumultuous relationship. Richard Madsen's frank and innovative examination of the moral history of U.S.-China relations targets the forces that have shaped this surprisingly strong tie between two strikingly different nations. Combining his expertise as a sinologist with the vision of America developed in Habits of the Heart and The Good Society, Madsen studies the cultural myths that have shaped the perceptions of people of both nations for the past twenty-five years.

The dominant American myth about China, born in the 1960s, foresaw Western ideals of economic, intellectual, and political freedom emerging triumphant throughout the world. Nixon's visit to China nurtured this idea, and by the 1980s it was helping to sustain America's hopefulness about its own democratic identity. Meanwhile, Chinese popular culture has focused on the U.S., especially American consumer goods—Coca-Cola was described by the People's Daily as "capitalism concentrated in a bottle."

Today we face a new global institutional and cultural environment in which the old myths no longer work for either Americans or Chinese. Madsen provides a framework for us to think about the relationship between democratic ideals and economic/political realities in the post-Cold War world. What he proposes is no less than the foundation for building a public philosophy for the emerging world order.