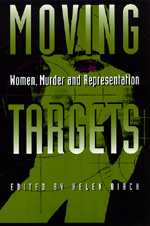 The rampaging female has become a new cliché in Hollywood cinema, a sexy beauty stabbing and shooting her way to box-office success. Fatal Attraction, Thelma and Louise, The Hand That Rocks the Cradle, and Single White Female are a few of the recent mainstream films that have attracted huge audiences. Meanwhile, true accounts of a teenager shooting her lover's wife and a battered woman bludgeoning her husband to death get prime news media coverage—and are quickly made into TV movies.

This pioneering collection of essays looks at our enduring fascination with women who murder. The authors explore how both fictional and real women are represented, as well as the way society responds to these women. The result is an often shocking picture of female violence that covers a vast territory: the Australian outback, a Florida highway, an Austrian hospital, a French village, and Hollywood. The women are as diverse as their settings: middle-class housewives, prostitutes, house maids, nurses, high-powered professionals.

There is much here to provoke controversy. Society's uncertainty over the role of premenstrual syndrome, the fear of lesbianism, female violence as self-defense against patriarchy, and "appropriate" female behavior are issues that push buttons on several levels. Moving Targets is must-reading for anyone concerned with violence and representations of women in our culture.

Helen Birch has been a literary editor, freelance journalist, and writer, as well as an editor for the Guardian, Independent, and New Statesman and Society. She lives in Cambridge, England.

An Eye for an Eye: The Case of the Papin Sisters, Nicole Ward Jouve
If Looks Could Kill: Myra Hindley and the Iconography of Evil, Helen Birch
The Trials of Motherhood: The Case of Azaria and Lindy Chamberlain, Briar Wood
Biting the Hand that Breeds: The Trials of Tracey Wigginton, Deb Verhoeven
A Decade of Deadly Dolls: Hollywood and the Woman Killer, Christine Holmlund
Body Talk: The Sexual Politics of PMT, Melissa Benn
Pleading for Time: Justice for Battered Women Who Kill, Lorraine Radford
Rocking the Cradle: Mothers Who Kill Their Children, Allison Morris and Ania Wilczynski
'Angels of Death': The Lainz Hospital Murders, Bettina Heidkamp
The Female Serial Killer: An Evolving Criminality, Candice Skrapec