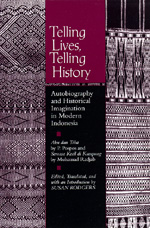 These two memoirs, superbly rendered into English for the first time, provide unique windows into the Sumatran past, in particular, and the early twentieth-century history of Southeast Asia, in general. Originally published soon after the Indonesian Revolution (1945-1949) liberated the island chain from Dutch control, these unusually insightful narratives recall the authors' boyhoods in rural Toba Batak and Minangkabau villages. In reconstructing their own passage into adulthood, the writers inevitably tell the story of their country's turbulent journey from colonial subjugation through revolution to independence. Susan Rodgers's perceptive introduction illuminates the importance of autobiography in developing historical consciousness and imagining a national future.

Susan Rodgers is Associate Professor of Anthropology at Holy Cross College and coeditor, most recently, of Indonesian Religions in Transition (1987).

PART ONE • TWO SUMATRAN CHILDHOOD MEMOIRS
Imagining Modern Indonesia via Autobiography
Introduction
The Texts and Their Authors
Autobiography in Indonesian and Malay Historical Traditions
Images of Self and Society
Book Learning, Schools, Language, and Knowledge
Portrayals of Religion
Images of Time and Historical Narration
Sumatran Childhood Autobiography as History
A Note on Translation
Notes