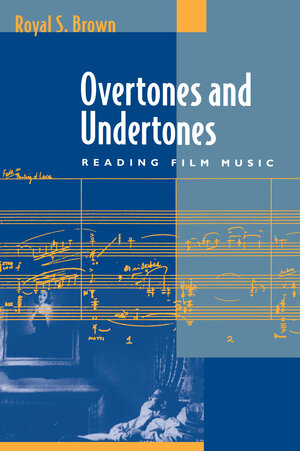 Since the days of silent films, music has been integral to the cinematic experience, serving, variously, to allay audiences' fears of the dark and to heighten a film's emotional impact. Yet viewers are often unaware of its presence. In this bold, insightful book, film and music scholar and critic Royal S. Brown invites readers not only to "hear" the film score, but to understand it in relation to what they "see."

Unlike earlier books, which offered historical, technical, and sociopolitical analyses, Overtones and Undertones draws on film, music, and narrative theory to provide the first comprehensive aesthetics of film music. Focusing on how the film/score interaction influences our response to cinematic situations, Brown traces the history of film music from its beginnings, covering both American and European cinema. At the heart of his book are close readings of several of the best film/score interactions, including Psycho, Laura, The Sea Hawk, Double Indemnity, and Pierrot le Fou. In revealing interviews with Bernard Herrmann, Miklós Rósza, Henry Mancini, and others, Brown also allows the composers to speak for themselves. A complete discography and bibliography conclude the volume.

Royal S. Brown is Professor and Chair of the Film Studies Program at Queens College, and editor of Focus on Godard.

"Royal S. Brown has contributed a major resource on film music. Overtones and Undertones is an outstanding in-depth exploration of the relationship between music and motion picture."—Fred Karlin, composer

"Royal Brown's book on film music, Overtones and Undertones, is a remarkable document: an enormous amount of information assembled and made sense of by a fine intellect. Prof. Brown demonstrates that it is indeed possible for an academic—and a professor of Romance Languages at that—to deal intelligently with our esoteric art."—David Raksin,composer