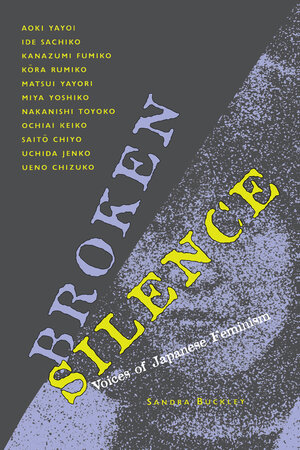 Broken Silence brings together for the first time many of Japan's leading feminists, women who have been bucking the social mores of a patriarchal society for years but who remain virtually unknown outside Japan. While Japan is often thought to be without a significant feminist presence, these interviews and essays reveal a vital community of women fighting for social change.

Sandra Buckley's dialogues with poets, journalists, teachers, activists, and businesswomen exemplify the diversity of Japanese feminism: we meet Kanazumi Fumiko, a lawyer who assists women in a legal system that has long discriminated against them; Kora Rumiko, a poet who reclaims and redefines language to convey her experiences as a woman; Nakanishi Toyoko, founder of the Japanese Women's Bookstore; and Ueno Chizuko, a professor who has tackled such issues as pornography and abortion reform both in and out of the academy.

These women speak to a host of issues—the politics of language, the treatment of women in medicine and law, the deeply entrenched role of women as mothers and caregivers, the future of feminism in Japan, and the relationship between Japanese feminists and "western" feminisms. Broken Silence will do much to dispel Western stereotypes about Japanese women and challenge North American attitudes about feminism abroad. With a timeline, glossary, and comprehensive list of feminist organizations, this is a long overdue collection sure to inform and excite all those interested in feminism and Japan.

"Buckley has turned the task of editing/translation into a dynamic process of political collaboration. The voices of Japanese feminists, in all their diversity and power, are here set off by Buckely's lucid contextualizations and theoretically informed questions. With its 'Time-line' and contact list, this book is intended for activist as well as academic audiences. As such, it participates in the 'difference' of Japanese feminism, as Buckley has sought to define it."—Brett de Bary, Cornell University

"Buckley's fresh and fascinating new work combines interviews and translations to give voice to some of Japan's leading contemporary feminists—their debates, concerns, and their views of women's movements in the United States and elsewhere. Motherhood, maternal love, and the 'mother complex' in Japan; domestic violence; Japan's pornographic manga, or comics; the state of divorce law; the treatment of Asian women in Japan's sex trade; lesbianism; and feminists' struggles with 'women's speech' in the Japanese language—are among the diverse topics that come under scrutiny in this engaging book."—Susan J. Pharr, Edwin O. Reischauer Professor of Japanese Politics and Director, Program on U.S.-Japan Relations, Harvard University

UENO CHIZUKOK  Professor, University of Tokyo; Sociologist
Biography
Interview
"Are the Japanese Feminine? Some Problems of Japanese
Feminism in Its Cultural Context"
List of Selected Works