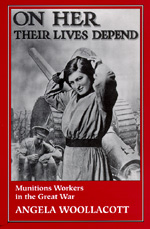 On Her Their Lives Depend Munitions Workers in the Great War

Munitions work offered working-class women—for the first time—independence, a reliable income, even an improved standard of living. But male employers and trade unionists brought them face-to-face with their subordination as women within their own class, while experiences with middle-class women co-workers and police reminded them of their status as working class.

Woollacott sees the woman munitions worker as a powerful symbol of modernity who challenged the gender order through her patriotic work and challenged class differences through her increased spending power, mobility, and changing social behavior.

Angela Woollacott is Assistant Professor of History and Director of the Women's Studies Program at Case Western Reserve University. She is the co-editor of Gendering War Talk (1993).

"A lively and scrupulous account of one of the wartime occupations that fostered crucial transformations in women's socioeconomic status during the early twentieth century. . . . Extremely useful both to scholars of women's history and to students of modernism."—Sandra M. Gilbert, coauthor of The Madwoman in the Attic

"A stunning achievement. . . . A wide-ranging, multifaceted, and beautifully nuanced rendering of the experiences of munitions workers in World War I. Especially impressive is the way that Woollacott incorporates a detailed analysis of the differences among women into a narrative that illuminates how gender and class together shaped the affect of the war on women's lives. Woollacott draws out the implications of her inquiry to propose a considered assessment of the extent to which the war was a watershed in the history of British women in the twentieth century."—Sonya O. Rose, author of Limited Livelihoods

"Woollacott bursts some myths and corrects some misapprehensions in her excellent study [that] tells us how World War I changed the lives of women and contributes to our greater understanding of how women changed the life of Britain."—R. J. Q. Adams, author of Arms and the Wizard: Lloyd George and the Ministry of Munitions, 1915–1916

"A thorough and excellent discussion of the role and significance of women's work in munitions in the First World War. . . . Indubitably offers an original and unusual contribution."—Philippa Levine, author of Private Lives & Public Commitment: Feminist Resistance in England, 1860–1900


"An important intervention in the growing literature on women and the Great War. . . . Woollacott has told an essential part of that story, and has done so with learning, grace, and modesty. A fine book, indispensable to students of the period."—J. M. Winter, Cambridge University

"A pioneering study. It illuminates, to an extent not achieved hitherto, two entwined aspects of Britain's war experience: the conversion to war needs of a peace economy; and the central part played by women in this transformation."—Trevor Wilson, author of The Myriad Faces of War: Britain and the Great War 1914–1918
Read More >

l. The Army of Women:
Munitions Factories and Women Workers
2. The Heterogeneity of Women Workers:
Mixing and Mobility
3. "Industrial Work Is Good for Women":
Health, Welfare, Deaths, and Injuries
4. Status and Experience as Workers
5. "High Wages and Premature Liberty'':
Wages, Autonomy, and Public Censure
6. Off the Job: Leisure, Socializing, and Sex
7. Class Relations among Women
8. "On Her Their Lives Depend":
Gender, War, and Women Munitions Workers