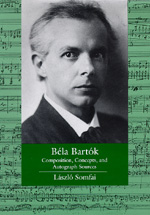 This long-awaited, authoritative account of Bartók's compositional processes stresses the composer's position as one of the masters of Western music history and avoids a purely theoretical approach or one that emphasizes him as an enthusiast for Hungarian folk music.

For Bèla Bartók, composition often began with improvisation at the piano. Làszló Somfai maintains that Bartók composed without preconceived musical theories and refused to teach composition precisely for this reason. He was not an analytical composer but a musical creator for whom intuition played a central role.

These conclusions are the result of Somfai's three decades of work with Bartók's oeuvre; of careful analysis of some 3,600 pages of sketches, drafts, and autograph manuscripts; and of the study of documents reflecting the development of Bartók's compositions. Included as well are corrections preserved only on recordings of Bartók's performances of his own works. Somfai also provides the first comprehensive catalog of every known work of Bartók, published and unpublished, and of all extant draft, sketch, and preparatory material. His book will be basic to all future scholarly work on Bartók and will assist performers in clarifying the problems of Bartók notation. Moreover, it will be a model for future work on other major composers.

Làszló Somfai is the Director of the Bartók Archives in Budapest and Professor of Musicology at the Liszt Academy of Music, Budapest. He has published books on Haydn, Bartók, and Webern in German and Hungarian, and an English edition of The Keyboard Sonatas of Joseph Haydn (1995).

"This book is at the frontiers of Bartók research. It presents a vast array of unknown material. Both the breadth and the depth of Somfai's approach is unique among source studies in twentieth-century music."—Reinhold Brinkmann, Harvard University