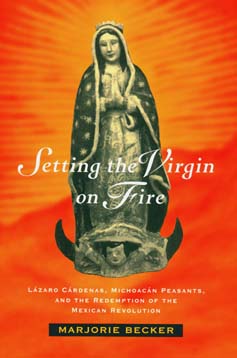 Setting the Virgin on Fire Lázaro Cárdenas, Michoacán Peasants, and the Redemption of the Mexican Revolution

In this beautifully written work, Marjorie Becker reconstructs the cultural encounters which led to Mexico's post-revolutionary government. She sets aside the mythology surrounding president Lázaro Cárdenas to reveal his dilemma: until he and his followers understood peasant culture, they could not govern.

This dilemma is vividly illustrated in Michoacán. There, peasants were passionately engaged in a Catholic culture focusing on the Virgin Mary. The Cardenistas, inspired by revolutionary ideas of equality and modernity, were oblivious to the peasants' spirituality and determined to transform them. A series of dramatic conflicts forced Cárdenas to develop a government that embodied some of the peasants' complex culture.

Becker brilliantly combines concerns with culture and power and a deep historical empathy to bring to life the men and women of her story. She shows how Mexico's government today owes much of its subtlety to the peasants of Michoacán.

Marjorie Becker is Associate Professor of History at the University of Southern California.

"A major work in the field of Mexican revolutionary and gender studies. Becker is an indefatigable fieldworker; the array and richness of her archival and oral sources is simply astonishing."—Gilbert M. Joseph, author of Revolution from Without