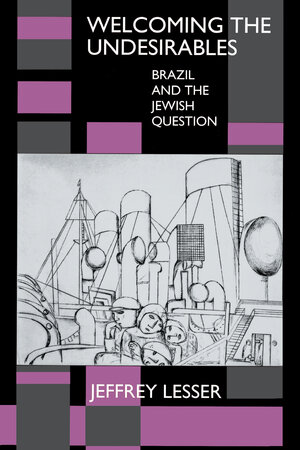 Welcoming the Undesirables Brazil and the Jewish Question

Jeffrey Lesser's invaluable book tells the poignant and puzzling story of how earlier this century, in spite of the power of anti-Semitic politicians and intellectuals, Jews made their exodus to Brazil, "the land of the future." What motivated the Brazilian government, he asks, to create a secret ban on Jewish entry in 1937 just as Jews desperately sought refuge from Nazism? And why, just one year later, did more Jews enter Brazil legally than ever before? The answers lie in the Brazilian elite's radically contradictory images of Jews and the profound effect of these images on Brazilian national identity and immigration policy.

Lesser's work reveals the convoluted workings of Brazil's wartime immigration policy as well as the attempts of desperate refugees to twist the prejudices on which it was based to their advantage. His subtle analysis and telling anecdotes shed light on such pressing issues as race, ethnicity, nativism, and nationalism in postcolonial societies at a time when "ethnic cleansing" in Europe is once again driving increasing numbers of refugees from their homelands.

Jeffrey Lesser is Professor of History and Director of the Latin American and Caribbean Studies Program at Emory University.

"This book adds an important new dimension to the worldwide history of the Jewish refugees during the Holocaust."—Jonathan D. Sarna, Brandeis University

"Lesser's book explains the Latin American Jewish experience more than any other book I know."—Robert M. Levine, University of Miami

List of Tables
A Note on Spelling
Abbreviations Used in the Text and Notes
Preface
Introduction: Brazil and the Jews

1. The "Other" Arrives
2. Nationalism, Nativism, and Restriction
3. Brazil Responds to the "Jewish Question"
4. Anti-Semitism and Philo-Semitism?
5. The Pope, the Dictator, and the Refugees Who Never Came
6. Epilogue: Brazilian Jews, Jewish Brazilians