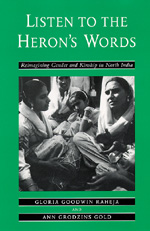 In many South Asian oral traditions, herons are viewed as duplicitous and conniving. These traditions tend also to view women as fragmented identities, dangerously split between virtue and virtuosity, between loyalties to their own families and those of their husbands. In women's songs, however, symbolic herons speak, telling of alternative moral perspectives shaped by women. The heron's words—and women's expressive genres more generally—criticize pervasive North Indian ideologies of gender and kinship that place women in subordinate positions. By inviting readers to "listen to the heron's words," the authors convey this shift in moral perspective and suggest that these spoken truths are compelling and consequential for the women in North India.

The songs and narratives bear witness to a provocative cultural dissonance embedded in women's speech. This book reveals the power of these critical commentaries and the fluid and permeable boundaries between spoken words and the lives of ordinary village women.

Gloria Goodwin Raheja is Associate Professor and Chair of the Department of Anthropology at the University of Minnesota and author of The Poison in the Gift: Ritual, Prestation and the Dominant Caste in a North Indian Village (1988). Ann Grodzins Gold is Assistant Professor of Religion at Syracuse University. She is the author of Fruitful Journeys: The Ways of Rajasthani Pilgrims (California, 1988) and A Carnival of Parting: The Tales of King Bharthari and King Gopi Chand (California, 1992).

List of Illustrations
Note on Transcription and Transliteration
Note on Kinship Terms
Preface: Listening to Women in Rural North
India (AGG and GGR)

1. Introduction: Gender Representation and the
Problem of Language and Resistance in India
(GGR)

3· On the Uses of Irony and Ambiguity: Shifting
Perspectives on Patriliny and Women's Ties to
Natal Kin (GGR)

4· On the Uses of Subversion: Redefining
Conjugality (GGR)

6. Purdah Is As Purdah's Kept: A Storyteller's Story
(AGG)

7· Conclusion: Some Reflections on Narrative
Potency and the Politics of Women's
Expressive Traditions (GGR with AGG)