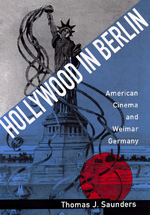 The setting is 1920s Berlin, cultural heart of Europe and the era's only serious cinematic rival to Hollywood. In his engaging study, Thomas Saunders explores an outstanding example of one of the most important cultural developments of this century: global Americanization through the motion picture.

The invasion of Germany by American films, which began in 1921 with overlapping waves of sensationalist serials, slapstick shorts, society pictures, and historical epics, initiated a decade of cultural collision and accommodation. On the one hand it fueled an impassioned debate about the properties of cinema and the specter of wholesale Americanization. On the other hand it spawned unprecedented levels of cooperation and exchange.

In Berlin, American motion pictures not only entertained all social classes and film tastes but also served as a vehicle for American values and a source of sharp economic competition. Hollywood in Berlin correlates the changing forms of Hollywood's contributions to Weimar culture and the discourses that framed and interpreted them, restoring historical contours to a leading aspect of cultural interchange in this century. At the same time, the book successfully embeds Weimar cinema in its contemporary international setting.

Thomas J. Saunders is Assistant Professor of History at the University of Victoria, Canada.

"The book approaches an often explored topic and consistently yields scintillating and original results, gaining its power from the richness and wide variety of its sources."—Eric Rentschler, author of West German Film in the Course of Time