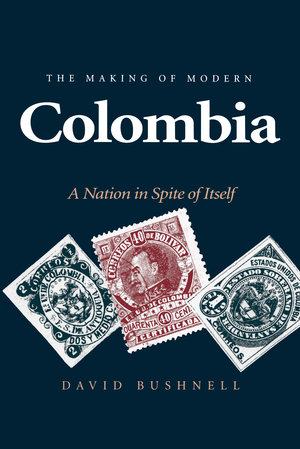 The Making of Modern Colombia A Nation in Spite of Itself

Colombia's status as the fourth largest nation in Latin America and third most populous—as well as its largest exporter of such disparate commodities as emeralds, books, processed cocaine, and cut flowers—makes this, the first history of Colombia written in English, a much-needed book. It tells the remarkable story of a country that has consistently defied modern Latin American stereotypes—a country where military dictators are virtually unknown, where the political left is congenitally weak, and where urbanization and industrialization have spawned no lasting populist movement.

There is more to Colombia than the drug trafficking and violence that have recently gripped the world's attention. In the face of both cocaine wars and guerrilla conflict, the country has maintained steady economic growth as well as a relatively open and democratic government based on a two-party system. It has also produced an impressive body of art and literature.

David Bushnell traces the process of state-building in Colombia from the struggle for independence, territorial consolidation, and reform in the nineteenth century to economic development and social and political democratization in the twentieth. He also sheds light on the modern history of Latin America as a whole.

David Bushnell (May 14, 1923 – September 3, 2010) was an American academic and Latin American historian who has been called "The Father of the Colombianists." Bushnell, one of the first Americans to study Colombia, was considered one of the world's leading experts on the history of Colombia. He regarded it as one of the least studied countries in Latin America by academic scholars in the United States and Europe, and was considered the first American historian to study and introduce Colombian history as an academic field in the United States.

"David Bushnell's The Making of Modern Colombia is a timely, important addition to the historiography of Latin America that will certainly stand as the basic English-language text on that country. As such, it should not only help shape and inform an upcoming generation of students and professional scholars of Colombia, but it should also heighten the awareness and understanding of all in the English-speaking world of this important member of the international community. In this capacity, it may even advance the quantity and quality of dialogue among said countries and peoples."—Journal of Interamerican Studies and World Affairs

"I simply cannot think of an example of recent scholarship on Latin America that I found as thoroughly rewarding and enjoyable as this study."—Charles Bergquist, University of Washington