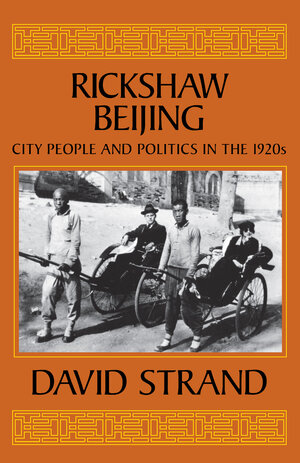 Rickshaw Beijing City People and Politics in the 1920s

In the 1920s, revolution, war, and imperialist aggression brought chaos to China. Many of the dramatic events associated with this upheaval took place in or near China's cities. Bound together by rail, telegraph, and a shared urban mentality, cities like Guangzhou, Shanghai, and Beijing formed an arena in which the great issues of the day--the quest for social and civil peace, the defense of popular and national sovereignty, and the search for a distinctively modern Chinese society--were debated and fought over. People were drawn into this conflicts because they knew that the passage of armies, the marching of protesters, the pontificating of intellectual, and the opening and closing of factories could change their lives. David Strand offers a penetrating view of the old walled capital of Beijing during these years by examining how the residents coped with the changes wrought by itinerant soldiers and politicians and by the accelerating movement of ideas, capital, and technology. By looking at the political experiences of ordinary citizens, including rickshaw pullers, policemen, trade unionists, and Buddhist monks, Strand provides fascinating insights into how deeply these forces were felt. The resulting portrait of early twentieth-century Chinese urban society stresses the growing political sophistication of ordinary people educated by mass movements, group politics, and participation in a shared, urban culture that mixed opera and demonstrations, newspaper reading and teahouse socializing. Surprisingly, in the course of absorbing new ways of living, working, and doing politics, much of the old society was preserved--everything seemed to change and yet little of value was discarded. Through tumultuous times, Beijing rose from a base of local and popular politics to form a bridge linking a traditional world of guilds and gentry elites with the contemporary world of corporatism and cadres.

"An important work that adds a new dimension to our understanding of the changing politics and society of China during the early twentieth century."--Lloyd Eastman, University of Illinois "Here is a study that combines rich description of Beijing life in the 1920s with incisive analysis of political change in modern China. In the interaction of police and rickshaw men, chambers of commerce and labor unions, political parties and occupational guilds, Strand finds the emergence of a new 'public' sphere of political activity. This is a path-breaking contribution to our understanding of modern Chinese politics."--Joseph W. Esherick, University of Oregon

List of Illustrations
Preface
Acknowledgments
A Note on Romanization and Currency

I. A Twentieth-Century Walled City
2. The Rickshaw: Machine for a Mixed-up Age
3. Rickshaw Men: Careers of the Laboring Poor
4· Policemen as Mediators and Street-Level ~ureaucrats
5· Jeweler, Banker, and Restaurateur:
Power Struggles in the Beijing Chamber of Commerce
6. Profits and People's Livelihood:
The Politics of Streetcar Development
7· Bosses, Guilds, and Work Gangs:
Labor Politics and the Sprouts of Unionism
8. Citizens in a New Public Sphere:
Widening Circles of Political Participation
9· City People Under Siege:
The Impact of Warlordism
IO. Union and Faction:
Organized Labor in the Wake of the Northern Expedition
11. Machine-Breakers:
The Streetcar Riot of October 22, I929
I2. Order and Movement in City Politics