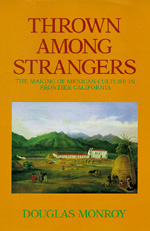 Thrown Among Strangers The Making of Mexican Culture in Frontier California

Every California schoolchild's first interaction with history begins with the missions and Indians. It is the pastoralist image, of course, and it is a lasting one. Children in elementary school hear how Father Serra and the priests brought civilization to the groveling, lizard- and acorn-eating Indians of such communities as Yang-na, now Los Angeles. So edified by history, many of those children drag their parents to as many missions as they can. Then there is the other side of the missions, one that a mural decorating a savings and loan office in the San Fernando Valley first showed to me as a child. On it a kindly priest holds a large cross over a kneeling Indian. For some reason, though, the padre apparently aims not to bless the Indian but rather to bludgeon him with the emblem of Christianity. This portrait, too, clings to the memory, capturing the critical view of the missionization of California's indigenous inhabitants. I carried the two childhood images with me both when I went to libraries as I researched the missions and when I revisited several missions thirty years after those family trips. In this work I proceed neither to dubunk nor to reconcile these contrary notions of the missions and Indians but to present a new and, I hope, deeper understanding of the complex interaction of the two antithetical cultures.

Douglas Monroy is Professor of History at The Colorado College. He is author of Rebirth: Mexican Los Angeles from the Great Migration to the Great Depression.

"This fine study sets a new standard for race-relations history. Rather than focusing on a single group, as do most works on the history of race and ethnicity, it deals with the interaction of Indians, Spanish, Mexicans, and Euro-Americans in frontier California. Besides revealing how each group treated others, or reacted to them, it penetrates deeply into the contrasting cultures that underlay these actions and responses. It is thoroughly researched, well-written, and interdisciplinary in the best sense."--Award Committee, James A. Rawley Prize of the Organization of American Historians "Monroy adeptly combines original historical records and a comfortable storytelling technique to highlight clashes over religion, property ownership, enforced labor and the head-on collision of social values throughout 19th century Southern California."--Wayne A. Saroyan, San Francisco Chronicle Book Review

List of Illustrations
Introduction
Part One: Burials
1. If Its Inhabitants Are Addicted to Independence:
Spain and the Indians of Alta California
2. Brutal Appetites: The Social Relations of the California
Missions
Part Two: Of Cows, Dons, Indians,
Cholos, and Peddlers
3· To Join as Neighbors: Pueblo Life in Los Angeles
4· Heaven, or Some Other Place: A Conquered
Los Angeles
5· At Considerable Less Wages: Mexicans and the
Labor Crisis of Southern California
Epilogue
People and History: An End and a New Beginning
Notes
Bibliography
Index