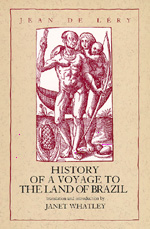 History of a Voyage to the Land of Brazil

When the famous anthropologist Claude Lévi-Strauss arrived in Rio de Janeiro, he had one book in his pocket: Jean de Léry's History of a Voyage to the Land of Brazil. Léry had undertaken his fascinating and arduous voyage in 1556, as a youthful member of the first Protestant mission to the New World. Janet Whatley presents the first complete English translation of one of the most vivid early European accounts of life in the New World.

Janet Whatley is Professor of French at the University of Vermont.

CHAPTER II
Of Our Embarkation at the Port of Honfleur in Normandy,
Together with the Tempests, Encounters, Seizure of Ships,
and the First Lands and Islands That We Discovered

CHAPTER III
Of the Bonitos, Albacore, Gilt-fish, Porpoises, Flying Fish,
and Others of Various Kinds That We Saw and Took in the
Torrid Zone

CHAPTER IV
Of the Equator, or Equinoctial Line: Together with the Tempests,
the Fickleness of Winds, the Pestilent Rains, the Heat,
the Thirst, and Other Inconveniences That We Endured in
That Region

CHAPTER VI
Of Our Landing at Fort Coligny in the Land of Brazil. Of the
Reception That Villegagnon Gave Us, and of His Behavior,
Regarding Both Religion and Other Aspects of His Government
in That Country

CHAPTER VII
A Description of the Bay of Guanabara Otherwise Called
janeiro in America; of the Island and Fort of Coligny, Which
Was Built on It; Together with the Other Islands in the Region

CHAPTER VIII
Of the Natural Qualities, Strength, Stature, Nudity, Disposition
and Ornamentation of the Body of the Brazilian Savages,
Both Men and Women, Who Live in America, and
Whom I Frequented for about a Year

CHAPTER IX
Of the Big Roots and the Millet of Which the Savages Make
Flour That They Eat Instead of Bread; and of Their Drink,
Which They Call Caouin

CHAPTER X
Of the Animals, Kinds of Venison, Big Lizards, Snakes, and
Other Monstrous Beasts of America

CHAPTER XI
Of the Variety of Birds of America, All Different from Ours;
Together with the Big Bats, Bees, Flies, Gnats and Other
Strange Vermin of That Land

CHAPTER XII
Of Some Fish That Are Common among the Savages of
America, and of Their Manner of Fishing

CHAPTER XIII
Of the Trees, Herbs, Roots, and Exquisite Fruits Produced by
the Land of Brazil

CHAPTER XIV
Of the War, Combats, Boldness, and Arms of the Savages of
America

CHAPTER XV
How the Americans Treat Their Prisoners of War and the
Ceremonies They Observe .Both in Killing and in Eating
Them

CHAPTER XVI
What One Might Call Religion among the Savage Americans:
Of the Errors in Which Certain Charlatans Called
Caraibes Hold Them in Thrall; and of the Great Ignorance
of God in Which They Are Plunged

CHAPTER XVII
Of Marriage, Polygamy, and Degrees of Consanguinity Observed
by the Savages; and of the Treatment of Their Little
Children

CHAPTER XVIII
What One May Call Laws and Civil Order among the Savages:
How Humanely They Treat and Receive Friends Who
Visit Them; and of the Tears and Joyous Speeches That the
Women Make to Welcome Them

CHAPTER XX
Colloquy upon Entry or Arrival in the Land of Brazil among
the People of the Country Called Tupinamba and
Tupinenquin: in the Savage Language and in French

CHAPTER XXI
Of Our Departure from the Land of Brazil, Called America;
Together with the Shipwrecks and Other Perils That We Escaped
on the Sea during Our Return

CHAPTER XXII
Of the Extreme Famine, Tempests, and Other Dangers from
Which God Delivered Us as We Were Returning to France

EDITIONS AND RECEPTION OF LERY